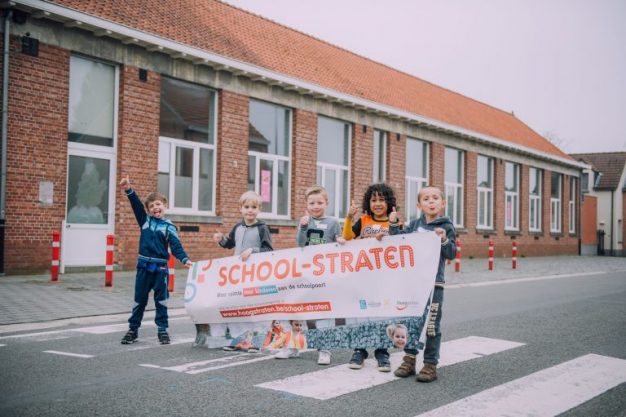 The Belgian municipality of Hoogstraten is making primary school routes safer. The municipality won the Flemish Road Safety Award 2019 last month and they are in the process of redesigning the area around eight schools. Central to this is ‘The Schoolstreet’ concept: a street in front of the school entrance that is closed twice a day to motorized traffic. Hoogstraten wants to deliver customised work and involves children and parents in developing the measures. Judith Schrijvers, sustainability officer, explained their four-step plan at the Flemish Road Safety Congress 2019.

Proud, happy, grateful. And a little speechless. Representatives from the city of Hoogstraten have just heard that they have won the Flemish Road Safety Award. “I have no words,” says Michel Jansen, the municipal officer for Mobility in Hoogstraten. The theatre hall of the Bolwerk congress building in Vilvoorde is packed. Everyone claps. The majority voted for the municipality. “These people are the performers,” he says while pointing to his colleagues. “But it actually started with the children at school. They have made a project out of it and we as Hoogstraten can be very proud of that! ”

The prize is a reward for their hard work. Hoogstraten is on track making primary schools routes safer. The Schoolstraat is key: a street in front of the entrance of the school that is closed twice a day to motorized traffic. That concept has been around for a while, but the Flemish municipality, located near the Dutch border, stands out in a positive way.

The school street has travelled from the Italian city of Bolzano. It gained a foothold in Ghent. A pilot was running at two schools at the end of 2012 to early 2013 with positive results. The evaluation showed that the streets ensure a safer school environment and a smoother flow of traffic. 8 out of 10 parents, students, school staff and local residents think it is a good measure. The concept was quickly followed. The Flemish and Brussels regions want more school streets and as they announced at the end of last year, they will make millions of euros available for that. Flanders recently announced that a large campaign for more school streets is a success and will be continued. The campaign site reports more than 130 Flemish schools have a school street or extensive plans for it.

Hoogstraten wants to inspire. Judith Schrijvers, sustainability officer, explained their four-step plan in a workshop at the conference. The main principles are: looking at the routes to school with the eyes of a child, actively involving children, but also parents, in devising and implementing measures. The aim is not only to increase road safety, but also to reduce CO2 emissions.

“If users of the school environment can help think about solutions, they will be involved right from the start,” says Schrijvers. “If you impose something from behind your desk, it doesn’t work. You really need to get started with the user. ”

Four steps are central to the Hoogstraten approach, in short: start with the child, search with parents for solutions, test and evaluate and finally implement. Eight schools have participated, two of them have already completed the entire step-by-step plan. The steps are applicable to everyone, she underlines. “Anyone who wants to redesign a square, street or school environment and put the user at the center can start using it. The steps are not cast in concrete, Schrijvers emphasizes. “We deliver customized work. The pace and intensity vary for every school.”

1. What does the child want?

Start with the student, that is the first step, says Schrijvers. “We start with a perception study: how do children experience the school environment, what do they think of it? Here we apply different methodologies, depending on the time: interviews, surveys for example. But we also give children a GoPro children and they film the route to school. This way we can see at a child’s eye level how they experience the route to school, and we see that they interact or have to avoid the cars around them.

The children indicated: the car takes up so much space that we have too little space for cycling and walking

According to the sustainability officer, this has already yielded many interesting insights. “It was a good basis for us to talk to adults about: how does your child experience the school environment? And whatever we learned: children can easily identify where the bottlenecks are. In Hoogstraten the, children mainly indicated: the car takes up so much space that we have too little space for cycling and walking. The third point has to do with the behaviour of parents and grandparents. The children think that they often drive too fast and speed off too quickly. ”

2. Formulate challenges and find solutions together

Once the results of the perception study have been received, they can be processed. That happens in step two. Schrijvers explains that it is very important at this stage to get a good understanding of the problems – and those problems do not have to be the same for every school. “Gaining insight can be done in various ways: surveys, questioning people, counting, collecting data. But you should also just watch: make sure you are there in the morning, afternoon and evening and study how the traffic flows of cyclists, cars and pedestrians interlock and where the bottlenecks are. If you recognise the problems, you can look for solutions together.”

Equally important, Schrijvers emphasizes, to ascertain who the stakeholders are and to involve them. “Of course the school itself, the teachers, parents, grandparents, but also local residents, the trader on the corner, public transport, the police. Everyone must have the opportunity to think along.”

Once the bottlenecks have been mapped out, the solutions can be considered. The municipality organizes “co-creation sessions” for this. Here adults, parents and grandparents are mainly challenged to come up with creative solutions. And importantly: solutions that they themselves control. Hoogstraten then tests these measures with a number of mobility experts and with the children themselves.

“That is how we came up with a package of measures that were ready for testing. The measures are widely supported. The people who came up with them are co-owners.” The solutions can be very different in nature, the Hoogstraten official explains to the audience. Opening and closing a street around the school for motorized traffic, for example, the school street. Or turn a street into a cycle street. Or keep a separate section on the road free for children or cyclists. But it might just as well be promoting carpooling.

The pilot phase is now starting. “I think it is very important that you emphasize in this phase: let’s do it together, and: we are only testing, nothing is final yet.” Testing is possible with temporary infrastructure: temporary signs, concrete blocks as road separation. It doesn’t have to be perfect and cost a lot of money, Schrijvers emphasizes.

You notice quickly enough whether people are satisfied

According to her, it is important that you as a municipality, school or police are present and see whether the measures work or not. If necessary, adjust. Then it is useful you can appeal to the technical department of the municipality.

Then it is time to evaluate. “That is very comprehensive, with a survey,” says Schrijvers. “But it can also happen quickly. We recently put a sign at a school party on which people could stick stickers. That gives you fast feedback if people are satisfied or not.”

Schrijvers states that people should not be questioned on their individual experience, but on that of the group. “Let it reflect on the effect of the measure on cyclists and walkers. In Minderhout we saw that 80 percent of the respondents really embraced a rather difficult measure, such as closing a school for motorized traffic because they saw that it had a positive effect on a large group.”

After the test phase, and after a positive evaluation, the measures can be introduced. “Ensure you are clearly communicating throughout the process,” Schrijvers tells the audience. There are a number of “quick wins”, the official says. You have to implement it quickly to show that you mean business. Larger investments, such as the redesign of a street, will take some time. “It is important that you have the time and resources for that.”

“Keep in contact with the target group. You can do this through a website, the newspaper, newsletters – make sure you are recognisable. Make sure people know what is changing and what is expected of them. As one parent recently said, “I didn’t have time to go to the sessions, but I felt enormously involved because I was kept up to date.”

More about the method can be found on hoogtraten.be/school-straten

During the Child in the City International Seminar in Antwerp, Belgium there will be a parallel session on Sustainable mobility on Tuesday, May 21, 2019, at 13:20 – 15:20. Click here to register.

Article by Jan Pieter Rottier. Translation from Dutch to English by Julia Zvobgo. To read the original article in Dutch click here.