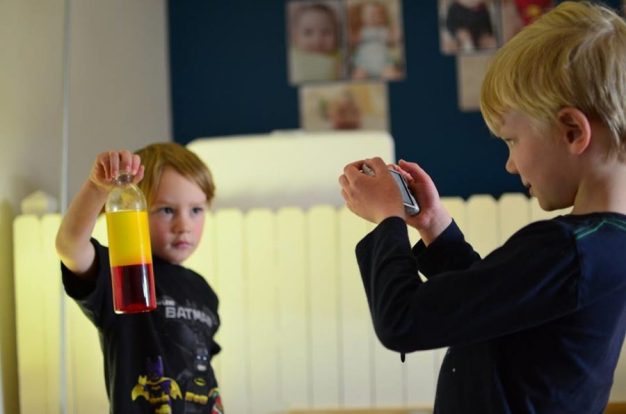 Boulder Journey School feels different from most other child care centers almost as soon as you walk through the door. In the hallways, there’s a kid-sized mail-sorting station, a giant metal spaceship trimmed with white and green lights, and a child-designed memorial for the school’s chickens, who were killed by raccoons a few years ago.

Boulder Journey School feels different from most other child care centers almost as soon as you walk through the door. In the hallways, there’s a kid-sized mail-sorting station, a giant metal spaceship trimmed with white and green lights, and a child-designed memorial for the school’s chickens, who were killed by raccoons a few years ago.

Preschoolers there help decide what and how they learn, drawing on their interests, imagination, and environment. Which means trying out adult-style jobs, building 10-foot-tall contraptions, and even talking about death are all par for the course.

It’s all part of the school’s Reggio Emilia-inspired approach to early education — one that prizes play-based and project-based learning, grounded in the local community. At least two public preschools in Denver will soon begin using the approach.

Early childhood leaders in Denver see the adoption of Reggio in district classrooms as a milestone that brings a celebrated approach typically found in private preschool programs to a diverse group of children in the public sphere.

Next fall, with help from Maher and other partners, a new Reggio Emilia-inspired child care center and preschool will open in a facility called Z Place in the Green Valley Ranch neighborhood. A new preschool program planned for Inspire Elementary School in the Stapleton neighborhood will also use the Reggio approach, which school leaders said ties in well with the expeditionary learning focus in other grades.

“Denver has been a bold city around early childhood,” said Rebecca Kantor, dean of the school of education and human development at the University of Colorado Denver, a partner in the work at Z Place. And adopting the Reggio approach is a “continuation of that bold theme.”

Denver isn’t the first community to incorporate Reggio principles into public classrooms. Early education programs in Boston, Indianapolis, and Tucson, among other cities, have implemented them, but the approach is hardly widespread.

At Z Place, the student body will include some children in the federally funded Head Start preschool program. School leaders say that there are special challenges when adapting Reggio for taxpayer-funded classrooms because of additional state and federal regulations governing everything from technology use to how children are assessed. Still, they believe it’s doable since Reggio is a philosophy of teaching and learning, rather than a prescriptive program.

In addition to Z Place and Inspire, Denver district officials may also bring Reggio to two programs in South Denver in 2020: The Stephen Knight Center for Early Education, which includes preschool and kindergarten, and Place Bridge Academy, a school for immigrant and refugee students that will soon be getting new preschool space.

Currently, most district-affiliated preschools use what’s called the Creative Curriculum, a research-based curriculum popular nationwide. About 15 use a curriculum called Tools of the Mind, which emphasizes social-emotional skills. Another handful uses the Montessori method, in which students in multiage classrooms learn at their own pace with the help of special educational materials. In addition to using the Reggio philosophy, the Z Place program will incorporate Montessori principles and emphasize the inclusion of students with disabilities alongside typically developing children.

Unlike Montessori, which is named for its founder, Italian educator Maria Montessori, Reggio Emilia is named for a place — that is, the northern Italian city where the educational philosophy first emerged after World War II. That’s because learning about and through the local community figures prominently into the approach, even for the smallest children.

For example, in Molly Lyne’s toddler classroom at Boulder Journey School, “bus” is the name of the game these days. That’s because city buses and school buses often pass by the playground just outside her room — regularly piquing the interest of her 1-year-old charges who watch the vehicles through holes in the fence and often blurt out the word “bus.”

To capitalize on their interest, Lyne and her two assistant teachers sometimes project a video on the wall showing what it’s like to be on a moving bus, from showing the traffic passing by to a simulation of the loud, creaky lurch passengers hear when the bus stops. Like all the technology used at the school, the video isn’t meant for the kids to sit and watch quietly. It’s intended as a backdrop and inspiration for their play.

Older students at Boulder Journey get even more opportunity to interact with the community. When a new pizza restaurant opened near the school several years ago, preschoolers got to visit — taking photos and interviewing restaurant patrons. They also offered up a critique: The restaurant didn’t quite work for little kids — the stools didn’t spin, for example, and the toilets in the bathroom were too high. Back at school, the children fashioned their own ideal restaurant furnishings out of clay, a collection featured at the pizzeria for a time and now displayed in the school hallway.

“It’s not only getting kids ready to read at third grade proficiently, but it’s for them to become citizens, owners of their community … and understand how their neighborhoods are different from other neighborhoods in the city,” said Roy, who last year visited Reggio Emilia schools in Italy with a delegation from Boulder Journey School and the University of Colorado Denver.

“People think because children have a voice in their education, in the way the day’s organized, in the projects that are developed, that the teachers are invisible and hands-off, and that’s not the case,” she said. “It’s a highly structured dance between children and adults to make sure all voices are represented.”

At Reggio schools, you won’t likely see any commercially produced alphabet charts, daily schedules, or cartoony posters. Many Boulder Journey classrooms have attractive blond wood furniture, colorful light tables and aquariums full of fish. The “materials room,” where kids can craft and create, is a feast for the eyes — with wood, colorful fabric, tubes, lids and other supplies arranged neatly on white shelves that line bright orange walls.

Maher said people who tour her school tend to think she has a big budget because the school is beautifully appointed. But many of the school’s decorations and supplies are inexpensive, everyday items that can be found around town, she said.

Maher acknowledges that being in Boulder, an affluent community northwest of Denver, means a wealthier pool of families. About 20 percent of her students receive some kind of help paying tuition, which is about $1,300 a month for a preschooler who attends four hours a day, five days a week.

The percentage of students who need financial assistance will be higher at the Denver programs’ adopting the approach next year. A little over one-third of Inspire’s student body come from low-income families, and the new Z Place program will likely serve a high proportion of such students.

At Inspire, there are already two teachers with training in Reggio, both graduates of a special masters degree program run by the University of Colorado Denver and Boulder Journey School.

One of them is Sarah McCarty, a kindergarten teacher who had never heard of Reggio before she entered the program. She believes the approach, in addition to helping kids build creativity, work collaboratively and develop problem-solving skills, instills a love of learning.

“I’ve never seen a kid who, when they got to do what they wanted, wasn’t happy about it,” she said.

UNICEF: Schools for more than 168 million children globally have been completely closed for almost a full year

Homeschooling: links with inequality are far from new