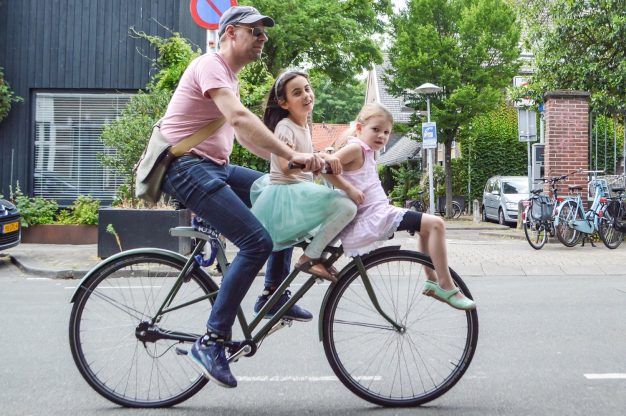 Building the cycling city with Modacity

Published on 14-11-2018 at 09:21
‘Building the Cycling City: The Dutch Blueprint for Urban Vitality’ is a must read. It contains insights and lessons for those interested in building a bike friendly city and a child friendly city. In this interview with Child in the City, the authors Melissa and Chris Bruntlett from Modacity discuss their new book and work.
Melissa and Chris Bruntlett co-founded Modacity. With their platform, they strive to educate people and cities about the inherent benefits of moving away from a car-centric transportation model, to a more inclusive one that is accessible to people of all ages, abilities, and economic means. They do this through their work as writers, filmmakers, photographers, and speakers.
In 2016 they toured the Netherlands by bike. They visited five cities Rotterdam, Groningen, Amsterdam, Utrecht, and Eindhoven. This was the genesis of their book.
How do children benefit from a cycling city?
Children who grow up in cycling cities that are safe and comfortable to travel in by bicycle enjoy a higher level of freedom, independence, and connectivity to their communities. In many cities where cars dominate, parents are often scared to let their children roam until they are nearly teenagers, meaning they don’t start learning to navigate their cities independently for most of their childhood. This does them an incredible disservice because children who learn those skills early on in life feel more confident when they are older to travel on their own without needing a parent to guide the way and are therefore better prepared to navigate the world as adults.

How have the Dutch included children in their city design or made it possible for them to bike with ease?

The Dutch approach to city design is to make travelling by bicycle anywhere in a given city or town intuitive, meaning without little planning or too much thought, you can cycle from one end fo the city to the other comfortably. They’ve achieved this through a combination of fully separated cycling facilities where needed, but largely through traffic calming measures on 75% of their streets, done through different road treatments and speeds of 30 kms or less that make it so cars feel like guests on these streets. In addition, many schools have “car-free” zones directly in front of the entrances, encouraging parents to leave their children about a block away from the school so they can travel the rest of the distance independently without cars. All these combined make cycling at a young age comfortable, safe and easy.
What are key design elements that Dutch cycling paths have?

The key design elements of Dutch cycling paths is that they are implemented in context, depending on how a given street or pathway is used. For roads with high volumes of car traffic moving at faster speeds, generally 50km/hr or high, full separation is necessary, be that a separated facility adjacent to the street either done with some form of barrier or raised separation, or in the case of motorways, a pathway located several meters away from the motorway, usually separated by grass and fencing. on traffic calmed streets, generally cars and bikes mix, but bikes have the priority, so cars must always give way. In some cases, these streets are designed as Fietsstraats, paved with the recognizable red asphalt used on all the countries cycle paths, with signage noting that cars are guests on the streets and must behave accordingly. one shared pathways where people on bikes and foot mix, ambiguity is often used where people on bikes move slower and watch out for others on the pathway.

How have your children adjusted to a multi-modal lifestyle?
For our children, walking, cycling and transit has been a part of their lives for as long as they can remember. This means that for them, car travel is a treat, and they’ve grown up with a closer connection to their city. Generally, they know how to get around our neighbourhood, often leading the way, they enjoy walking or cycling to school on their own and have built relationships with local shopkeepers and neighbours because they are out and experiencing our community instead of being shuttled around in a car. Our oldest, who is 12, has even started travelling around the city on transit, have grown up using the Skytrain and bus systems with us, and now is able to do so with her friends. They are growing up to be confident young people who we are increasingly comfortable allowing them to travel around our city without us and building their own independence and relationship with their city.

If a city wants to become a cycling city what are the first steps they should take?

First and foremost, if cities are truly serious about creating space for cycling, then they need to be willing to rethink how street space is allocated to more vulnerable road users. Paint on busy streets is not enough to make the average person feel comfortable cycling. By combining separated facilities with traffic calming and multi-use and dedicated bike pathways, in a context that makes sense for their streets, any city can become a cycling city. But at the same time, there has to be an understanding that they are designing their streets for all trips, not just the one to work. This means connecting where people live to shops, community centres, schools, parks – places people actually want to go. By designing cities in a way that makes driving a car the last choice instead of the easiest, only then can they start achieving success in becoming a cycling city.

Is there a significant milestone from Modacity that you would like to share?
After spending two years researching and writing our book, Building the Cycling City: The Dutch Blueprint for Urban Vitality, we have had the incredible fortune to be able to travel around Canada and the United States sharing the stories and lessons we’ve learned, not to mentioned spending 6 weeks traveling throughout Australia and New Zealand with our children. It is such an incredible opportunity and one we won’t soon forget as we make new travel memories as a family! 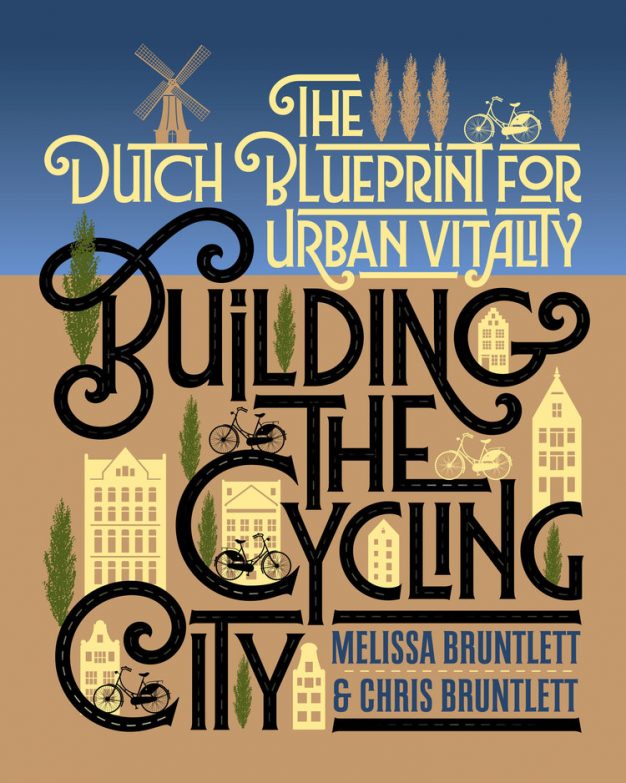