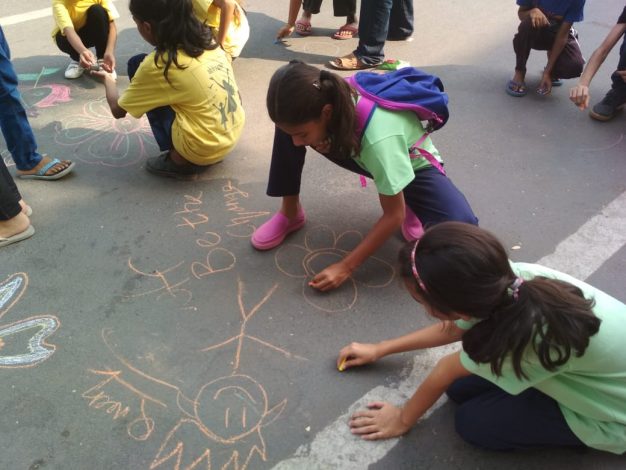 Why play is important in urban development

It is time that we put children at the center of urban planning. That is the opinion of Kirti Zala, Project Head of aProCh a community based initiative in the city of Ahmedabad. In this article, Kirti makes a case for why play is important in urban development and how aProCh helps children leave their mark on their city.

When we look at the design of a city, what are the factors that come to mind? Roads, buildings, highways, bridges and so on. Basically the infrastructure. And what do we keep in mind when we plan a city? Things such as where the buildings will be made and roads with more traffic need to be wider. The planning for community spaces or places for people to walk and sit often comes last. In order to beautify our cities and make them smart, urban developers tend to miss out or give less attention to human needs.

So when we look at the most urbanized city, it may be technologically smart but not human smart. 30% of the population is made up of youth under the age of 18. And yet they are neglected when cities are designed. We may wish for a better future for our children, our cities and nation, but that does not happen without proper planning and participation.

According to urban planner, Timothy Duin, “By 2030, the majority of the world’s urban population will be children. By considering children’s perspectives when planning urban areas, we can design cities that meet our needs now and into the future. We need to design spaces for all ages, abilities and backgrounds to enjoy together.”

Children should be able to play freely in their local areas. Children have the same right to use and enjoy public space as others. Local streets, estates, green spaces, parks and town centres should be accessible for children and young people to move around in safety and offer places where they can play freely, experience nature, explore their environment and be with their friends.

Children represent our future. As the urban population is growing there is an increase in the number of children growing up in an urban setting; it is time that we put them at the center of our planning and thus we will end up with better places for all. With more children growing up in urban settings, I believe it is important that they should know about cities, neighborhoods, and urban setting from an early age on. They should have opportunities to get involved and make their voices heard and their opinions count.

The rights of children

While each nation has various acts and policies to protect the rights of children, the implementation is still a question in most countries. The global processes such as urbanization are affecting children’s right at the local level. One of the rights of children to play is neglected most of the time in process of urban planning and designing. There is a huge gap in terms of children’s participation vs. children’s exclusion at policy level with regards to the creation and usage of public spaces.

The purpose and desired use of the urban public space is not often viewed with the same lens by young children and adults in the area of public space design. Most of the public spaces are designed by adults excluding children. There is still a lack of commitment from governments to guarantee children’s rights. Most countries face issues with children’s rights regarding violence, poverty, diversity and participation.

As a society, it becomes our responsibility to increase opportunities for children to play. Open spaces need to be designed to provide them with a chance for recreation, curiosity and socialize. Children learn about their society, community, through exploration and observation. Limiting them to only the playground will restrict their creativity and curiosity.

Play is fundamental to children’s development and shapes their capacity for learning and social growth, particularly in the early years. Free and unstructured play in the outdoors boosts problem-solving skills, focus and selfdiscipline. Socially, it improves cooperation, flexibility, and self-awareness. Emotional benefits include reduced aggression and increased happiness. A study published by the American Medical Association in 2005 concluded, “children will be smarter, better able to get along with others, healthier and happier when they have regular opportunities for free and unstructured play in the out-of-doors.”

aProCh (a Protagonist in every Child) is a community based initiative started in 2007 with a vision to create “Child friendly city”. With programs like Street Smart, Moving Experience, Parents of the Park, City on Cycles & City as My Landscape, they provide varied avenues to explore with curiosity engage in creativity and community and experience the joys of childhood. It is an attempt to sensitize children toward the city and their role as emerging citizens of the future.

Engaging children and young people in research and consultation ensures that their perceptive and voices are taken into account. aProCh provides a platform for children to be visible and heard by letting them design and create legacies; thus leaving their mark in the city.

Involving children at a very young age in community matters such as the city’s problems, expansion of the cities, the expectations of the citizens from the city, and their role in the city’s growth; will nurture them towards becoming empowered and responsible citizens of the future.