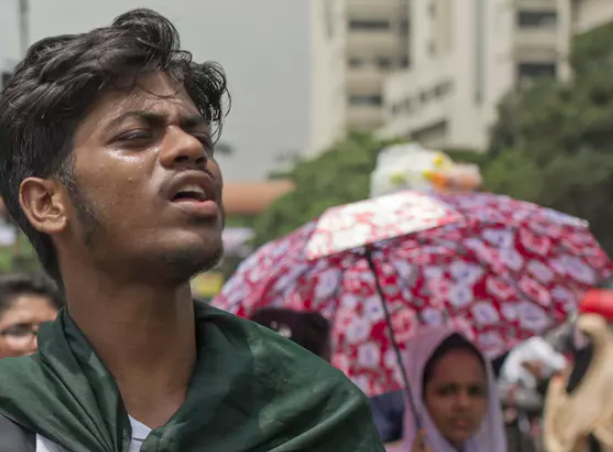 2Traffic jams – or “janjot”, as locals call them – are a fundamental part of life in Dhaka, the capital of Bangladesh. Sometimes the slowness of the traffic can give you a sense of claustrophobia, as you’re trapped between vehicles that have become immovable objects, writes Mark Lacy, Lancaster University

It’s easy to see why there is a growing ride-sharing business for motorbikes, which can weave their way through the traffic more quickly. Upmarket apartment blocks even advertise helipad access, to help rich citizens deal with Dhaka’s traffic problem.

Although slowness can feel like the norm there, when acceleration becomes possible, it can be deadly. Dhaka’s notoriously overworked and underpaid bus drivers race each other to pick up passengers, and earn on commission. Reports of corruption in Bangladesh’s transport sector suggest that poorly regulated private companies use bribery to obtain licences for unqualified and inexperienced drivers.

And so when two teenagers were killed by a speeding bus in July 2018, school children and college students took to the streets to do what – in their view – the government should have been doing all along: check the age and licences of drivers, and raise awareness of the dangers faced by citizens. The students set up blockades, and the traffic crawled through the streets at an even slower pace than usual.

At first, the government seemed willing to cooperate with the student demands. But there was mistrust on all sides: the government was concerned that a broader conspiracy was unfolding to undermine the regime, while students believed that links between government and the bus companies would frustrate their demands.

As the protests continued for more than a week, the situation in Dhaka deteriorated. Conflict broke out: police clashed with protesters, and protesters with pro-government groups. Several journalists reported being attacked and harrassed while filming in the streets. And a digital fog descended over the city, as the government blocked mobile internet access, making it harder to share images and information on social media.

Internationally renowned photographer and activist Shahidul Alam took to the street of his city to capture the protests. He shared videos to social media, and criticised the governent’s handling of the protests in an interview with Al Jazeera.

Hours later, government personnel arrived at his apartment to arrest him for spreading “false” and “provocative” information. Appearing in court the following day, the photographer said he was beaten in custody. At a hearing on September 11, he was denied bail.

Control over movement through the city has long been an obsession for governments the world over. Goods, vehicles and people must be able to move quickly, to promote business and development. But they must also be controlled and monitored, and in this sense the state becomes a system of brakes, imposing checkpoints, border controls, speed ramps, traffic lights and speed limits.

French philosopher Paul Virilio noted how politicians and bureaucrats agonise about the tipping point where they could lose control of the city, when the streets could be occupied, when the people put a break on circulation or when disorderly circulation results in chaos.

Virilio suggested that the development and design of Paris in the 19th century was orchestrated to ensure that streets could be policed as efficiently as possible – wide boulevards were intended to prevent blockades. Transparency was another obsession, making the city visible, with innovations such as street lighting (Paris, after all, is the city of lights).

Transparency makes city residents more secure – and offers up the urban landscape for surveillance by police and militaries. In recent years, such activities have intensified. From the police car on the street, to CCTV cameras on buildings, to the drones in the sky, new vehicles and technologies have become vital in recording and deterring certain behaviour.

Yet in societies equipped with smart phones, surveillance is no longer the practice of the state alone. As civilians block the streets in revolt, they can simultaneously circulate information and imagery to inform their compatriots about events. In Dhaka, and across Bangladesh, controlling the movement of information has become as critical to the state’s authority as the movement of people, goods or vehicles through the city.

Artists and photographers have the ability to circulate images and information in ways that can change how people see the world – and evade the control of the state. As a result, the government has become increasingly paranoid about the rise of “digital Bangladesh”, introducing new laws which critics say can be used to silence opposition.

Now it seems the government has resorted to a strategy of deterrence. Locking up Alam sends a message: if this can happen to a well regarded, internationally renowned photographer, it can happen to you. But at a time when civilians can share information and take to the streets faster than ever before, the imprisonment of Alam does little more than add to the government’s image as a vindictive state, desperate to maintain control.

This article has been corrected to reflect the fact that Alam was arrested hours after his interview with Al Jazeera, not days as originally stated.

This article is republished from The Conversation under a Creative Commons license. Read the original ar1icle.