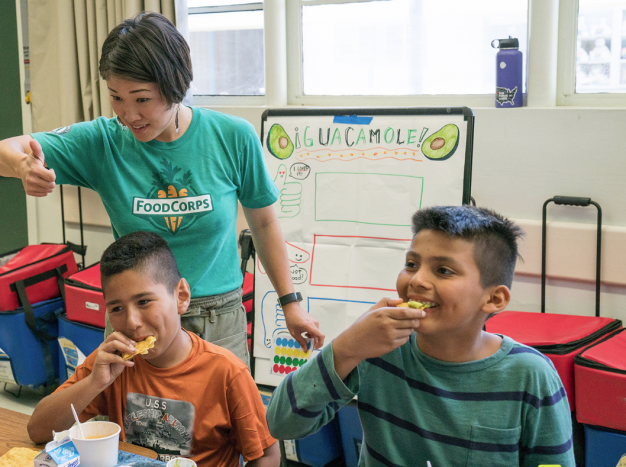 School food partnership aims to help thousands of US children

FoodCorps and the Urban School Food Alliance are two influential non-profit organisations which have teamed up to specifically target youngsters in 11 of the country’s largest school districts.

They will work together on initiatives to increase the quality of school meals, resulting in improvements to students’ health and their academic performance. The Urban School Food Alliance is a coalition of the largest school districts in the USA, including the cities of New York City, Los Angeles, Chicago and Dallas, and urban conurbations such as Orange County in Florida and Clark County in Nevada. FoodCorps works with schools and communities to promote healthy eating through initiatives like school gardens and hands-on lessons on cooking and nutrition.

Eric Goldstein, chairman of the Alliance and chief executive officer of School Support Services for the New York City Department of Education, said: “Both FoodCorps and the Alliance see value in elevating the role of food and nutrition in the way we think about education, the school day, and what kids need to thrive. FoodCorps and the Alliance can work together to enhance the way that academics, policy makers, and the education community think about the role of food on students’ success.”

A formal partnership between the two organisations will see several personnel changes at board level, as they identify strategies for how best they can move forward in working with local authorities, schools, industry and other non-profit bodies and stakeholders.

Curt Ellis, Co-founder and CEO of FoodCorps, said: “Schools are where kids spend half of their waking hours and where they eat nearly half of their daily calories. Over the past two years, FoodCorps and the Urban School Food Alliance have collaborated across multiple channels to make impactful changes and ensure kids receive healthy food in school.

“Healthy food is a building block for human potential. It can shape how we feel, how we learn, how much we can achieve in our lives and how long we will live. Both of our organisations are committed to making large-scale change in the school food arena and to helping younger generations become healthier generations.”

With an annual budget of around 830 million US Dollars, the Urban School Food Alliance was set up by school food professionals in 2012 to address child health issues in schools. It helps districts to share successful examples of healthy eating in schools and how to leverage their buying power with suppliers.

FoodCorps began life as Americorps, a grass-roots movement established by a handful of people in 2009. Since then it has raised funds through crowdfunding and other community initiatives to become a national success story, with thousands of participants. It has established itself as a leader in providing healthy school food education by deploying 225 full-time AmeriCorps volunteers to 350 under-resourced schools in 17 states and Washington, D.C.

Amanda Greenlee is a FoodCorps volunteer whose work in Paterson, New Jersey, shone a light on how many children struggle with hunger and also lack basic food knowledge. She won a prize worth 5,000 USD for her work. Read her story and how other successful ‘food in the field’ initiatives have benefited children across the USA.