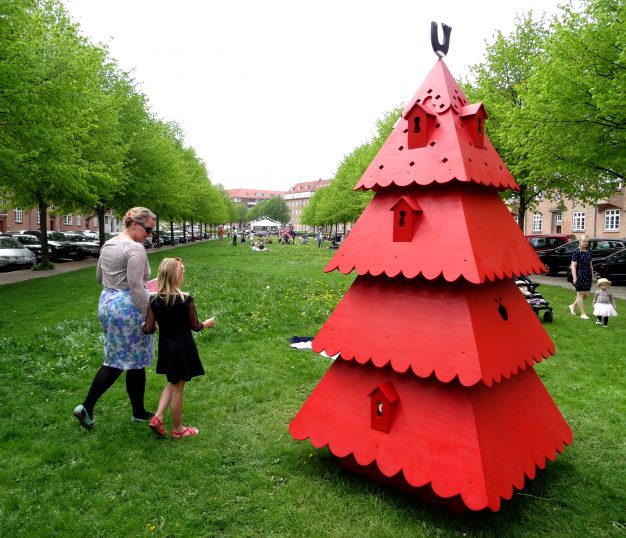 Published on 17-08-2018 at 09:00
An educational art and design-initiative named ‘A secret club’ builds playgrounds that keep the introvert in mind. The goal is to pique the user’s imagination. Because if play takes place inside your head, everything is a playground.
A secret club was founded in South East London in 2009 by Annabelle Nielsen and Kenn Munk, they both have background in teaching art and design, so their approach to play is to treat it as an art form, which means they give it as much attention and care as an artist would his or her artwork. They are also both introverts.

If you walk through the Danish town of Aarhus, you may come across a small structure that looks like a cross between a fir tree in the wrong colour and an overly ambitious birdhouse. If you crawl through a small hole in its side, you will find walls that are lined with oddities, medals, heart shaped skulls, hands holding century old keys and old pictures.
What you have found is actually a playground, but not like any other – this is the world’s first distinctly introvert playground. Conventional playgrounds are – possibly without anyone ever giving it much thought – designed for extroverts. They are places of ruckus and risk-taking, designed to cater to as many kids as possible – they are loud, wild and social places.
The quieter, more daydreaming, introverted kids often prefer solitary, non-physical play that mostly takes place in the mind and over the last year, a secret club – a Danmark based play initiative with a fittingly playful name – has dreamt up and built the playground for introverted play.
Play and the value of playing are enjoying a lot of attention at the moment, but there are huge differences between introverted and extroverted play – the latter is often seen as more valuable, because it builds social skills, whereas introverted children are often seen as creatures who need to come out of their shells. In fact, western society as a whole seems to favour the extrovert ideal with our brainstorming session, open space offices and group projects, but quieter, less action packed and more comtemplatative play can be a gateway to creative thinking.
Introverts often mull things over, they invent new worlds and explore them in the minds, they wonder and question and interpret reality to tell themselves tales. – traits that are very similar to those used by critical, creative thinkers.

The introvert playground looks nothing like a playground. First of all, there’s the size: It is tiny. There’s just room for one child inside it. You play on your own here. It is also clearly made by hand. Constructed mainly of sheets of plywood and found objects. The visual language is stylised, but more to look like an illustration than a toy.
One object is a remnant of a locally controversial piece of art made by Katharina Grosse for last year’s European Capital of Culture in which she sprays painted part of a park. When the artwork was disassembled, pink and white leaves from the project littered the streets, one of these is now on display in the playground. The playground’s objects are meant to suggest and encourage the invention of creative stories: The painted leaf seemingly has no connection to the 30’s photograph of a small ship – until the child invents one.
At the very top there’s a – slightly altered – visual translation of an old, Danish lullaby, each verse formed by a cutout and lit by the sun, through hidden holes, creating a zoom that ends with the complete, unknown darkness of a sausage in the belly of a bird in an egg in its nest…
Although the introvert playground is meant as a solitary experience, you can play – not with, but for others: If you peek out through the cutouts below the cabinet of curiosities, you become someone else. This miniature role play is actually something a lot of introverts enjoy as you slip into another role – it’s not you on the line, but the red superhero of the tree.

A secret club works extensively with found materials, not only for environmental reasons but because these objects come with a set of problems and possibilities as well as a past that will influence the process. They find that working with found objects serendipitously pushes projects in new, surprising directions – a carved ornament from an old chest of drawers became a grown-up Snow White for the cabinet of curiosities and a badly carved, found knight chess piece became a homage to Tove Jansson’s Moomins and their visually striking, imaginary world of Moomin Valley.
A secret club didn’t design the playground just for introverted children, because the extroverted can benefit from solitude and fantasising just as introverted kids get something from playing a game of football every now and again.
Tags: art, child friendly design, Denmark, extroverted play, innovative playground design, introvert playground, introverted play, play, playground
E-mailFacebookTwitterLinkedInWhatsApp

Kenn Munk is a co-founder of a secret club - an arts initiative that treats play as an art form. He grew up in Denmark building worlds out of Lego and exploring other worlds through Fighting Fantasy books. Kenn occasionally teaches creative thinking for designers.