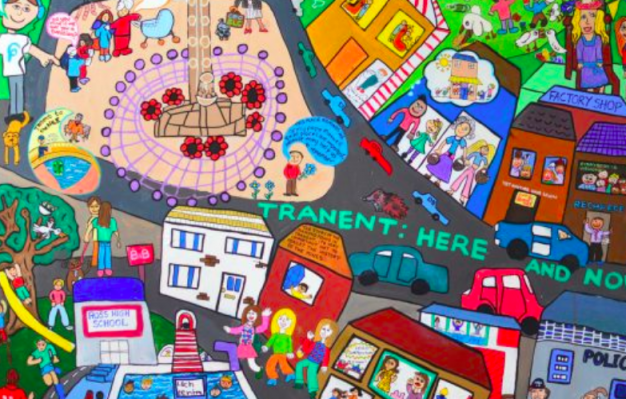 A giant mural designed by Scottish schoolchildren which enscapsulates their hopes for the future of their town is in line for a major planning award.

The Streets Ahead Mural was the creation of youngsters in Tranent, a town in southern Scotland. It was part of a community project which saw pupils work with local artists.

It has now been named as a finalist in the People’s Choice Award category at the 2018 Scottish Awards for Quality in Planning, organised by the Scottish Government.

The pupils’ aim was to design something striking which accurately spoke about how they see Tranent today, its past and its future development. Leading the project was the Children’s Parliament, with support from Historic Scotland, the Heritage Lottery Fund and the Tranent Conservation Area Regeneration Scheme, reports the East Lothian Courier.

Various local schools took part in workshops that came up with mural ideas, before a small group was selected to work with artists on the finished piece. It was later taken on a whistlestop tour of Europe, visiting Geneva and the United Nations, where those young people involved in the design appeared on stage to talk about their ideas.

They also accompanied the mural when it was taken to schools and railway stations across Scotland, to further explain the project to politicians and the public. It is now a permanent piece of art on display at Ross High School.

“We are really pleased to be continuing our exciting programme of work with the Children’s Parliament and building on the huge success of the original StreetsAhead Tranent project, especially as it links closely with the strong focus on children’s rights across East Lothian Council,” she is quoted as saying.

The Scottish Government will hold an awards ceremony later this year, when the mural’s creators will discover if it has won its category.