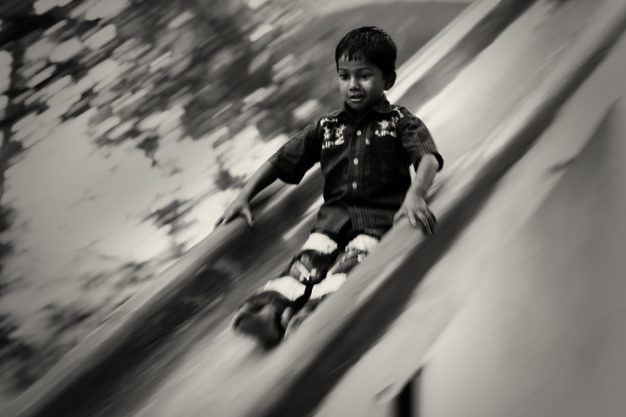 A happier childhood: Ahmedabad initiative is reuniting kids with playgrounds

Gadgets and indoor play have resulted in the child of today missing out on the joys of nature and outdoor life experienced by previous generations, says Indian educationalist and aProCh founder Kiran Bir Sethi. aProCh (a Protagonist in every Child) is a community based initiative that designs experiences to transform ‘child-unfriendly’ cities and re-imagine them to become more ‘child-friendly’.

Together Kiran Bir Sethi and Kirti Zala, Project Head of aProCh explain the background to this school-based project.

“Kids today spend more time with their gadgets than out playing with their friends,” laments Kiran Bir Sethi, who founded the aProCh initiative at the Riverside School in Ahmedabad. The aim of this project, which has now gone global, is simple – to make the nation’s cities safe, playful and fun-filled for children.

I have been witness to the last five decades of India not as a bystander but as one who has grown up walking the streets of many of our cities and interacting with some wonderful people across three generations. While I love my nation, what does not sit right with me are the many lifestyle changes that have come about in the name of urbanisation.

As a child, my fondest memories are of how every evening I played on the streets with my friends – games like Gilli-Danda, Pittu and Dabba, I-spy – and how we returned home with dirty hands and feet, sometimes even bruised, but always with the happiest hearts.

Over the years, the boundaries of our cities have expanded but, ironically, the free streets and community parks have shrunk. Our simple play times of yesteryear now seem old school for our children, and have been replaced by lengthened screen time, playing with ever-evolving gadgets and e-socialisation. The focus on indoor activities has reduced opportunities for human interaction and alienated today’s kids from experiencing the joy of nature and free play.

Safety concerns are on top of the mind for parents when they send their children to play outside the home since our cities are often not designed while keeping the child in mind. These days, I often look at the maze our cities have become and think about the words of William H Davies – ‘What is this life if full of care, we have no time to stand and stare…’

For the last decade, I have become a part of the aProCh (a Protagonist in every Child) initiative, taking a cue from the immense body of research that supports the positive impact of unstructured activities and free play on children. This has been highlighted explicitly in Richard Louv’s book ‘Child in the Wood’ where he mentions that we are facing ‘Nature Deficit Disorder’ today, which is affecting our children and thus, our society at large.

Several research studies show that the independent mobility of a child has reduced from 5 km to 500 meters in last 50 years. The child’s connection to his surroundings has clearly decreased substantially.

Theoretically, children might have more access to information about geographies and the diversity of nature than ever before, but they don’t know how it feels to be in nature, to run around in bare feet, feel the wind while cycling or look at the fields from atop a tree. I have vivid memories of how my school and other educational institutes in our locality used to be centres for community engagement.

The role of education

Schools were set up not just with the sole objective of imparting academic lessons to its students but also took on the responsibility of adult education and evening sports for those residing in their vicinity. This trend has diminished over the years, and many schools today serve only those children who are formally enrolled with them. Our children are ferried to and from home and school, and there does not seem to be space for any community in between.

Consider this – children (0-15 years) comprise almost 30 per cent of the total population in India. Today they are spending more time between the four walls of the school, the home or coaching centres, than ever before. And every wall that gets added adds a barrier that veils the mind. The focus of education should be to dissolve such boundaries.

This implies that we as a society have the immense responsibility of taking care of our children and their childhood. Together, we need to invest in planning and designing their childhood experiences in the best possible way. Empowering the child’s voice and believing that ‘Every Child Can’ will happen only with the paradigm shift of trusting that ‘Children are not the future – they are the NOW!’

Unsurprisingly, all of this insight about the current scenario children face in our cities came from none other than my students! In 2007, during one of my conversations with our children at Riverside, I got the sense that they often did not feel welcome at all places in the city. Some of them shared how even crossing the street was a herculean task for them, and they felt unsafe as the traffic paid no heed to their presence on the road.

This conversation fired us up to reclaim the spaces for our children. The birth of aProCh was momentous and an eye-opener for many in the city. What was most encouraging was the support that began to pour in. We soon joined hands with the municipal corporation, police, corporates, schools, NGOs & citizens to organise child-centric events in the city.

I’m so grateful to institutions such as the Indian Institute of Management (IIM), National Institute of Design (NID) and the Centre for Environmental Planning and Technology (CEPT) who continue to extend their unconditional support to aProCh and have played an important role in making this vision a reality. We marched ahead with the ambition of transforming our city into one where the child would have the freedom to explore, derive fun and joy, and have ample opportunity to build happy memories for a lifetime.

It was amazing how the spaces of the city suddenly started welcoming children with open arms. Many spaces like streets, parks, recreational places, corporate houses, and media houses which were hitherto closed for children became a part of the aProCh events.

This literally made it possible for children to say…

‘My City is my Playground’.

After this, various initiatives were designed and implemented under aProCh. ‘Street Smart’ was the outcome of this where all the stakeholders collaborated to make sure that the busiest streets are closed down for traffic once a month and offered children the opportunity to engage in games and fun activities on the street, irrespective of their age, economic background and religion.

Guruprasad Mohapatra, Ex Municipal Commissioner, Amdavad Municipal Corporation, Ahmedabad, said: “We are happy to involve children at a very young age in matters about the city’s prospects, the city’s problems, their role in the city, how the city is growing and what is the expectation of the citizens from the city – aProCh is a good attempt to give children the confidence to play their role as emerging citizens of the future Ahmedabad.”

Subsequently, we opened up more and more spaces to give the message to our children and society that we care. Programmes like Mov’ing Experience, Parents of the Park, City on Cycles and City as My Landscape were initiated to provide multiple avenues for children to explore with curiosity, engage in creativity and community while experiencing the joys of childhood.

All of these programs under aProCh are based on collaboration and bringing the community together for the betterment of children. We have partnered with around 40 schools and 40 NGOs in Ahmedabad so far, and information regarding the planned events is shared with all of them. This ensures that every event sees the participation of children from different communities and sections of the society, something important to see in the segmented society in which we live!

aProCh has completed ten years now, and the idea has travelled beyond the city of Ahmedabad. An idea that was born at The Riverside School in 2007, has today touched the lives of children and citizens across ten cities in India, which include Aurangabad, Anand, Baroda, Hyderabad, Jodhpur, Kolkata, Rajkot, Sangamner and Surat.

Beyond our borders, aProCh is now in Bangladesh and Mexico as well. The movement has been empowered by the participation of 5,00,000 children. aProCh is the Runner-up of the prestigious Financial Times/Citi Award and the Amex Serve2gether pro-bono Award.

In our impact study, it was evident that engaging with the aProCh initiatives has multiple benefits for children, such as increased self-confidence and skills such as decision-making, creativity, leadership, teamwork, bonding with peers and respecting others.

The initiative has also helped change the mindsets of the local government and the community at large. Some examples which make this visible are children participating in traffic weeks, leading to the creation of Child-Friendly Zebra Crossing and the designing of parks.

aProCh has inspired other schools and NGOs to take the responsibility of running this programme in their vicinity. aProCh has received continuous affirmation from all stakeholders regarding the positive impact of the different initiatives on the holistic development of children. We endeavour to reach more and more schools, NGOs, Corporates and Citizens to facilitate active engagement of all custodians in building ‘child-friendly cities’.

Kiran Bir Sethi is the founder of 'aProCh' and the Founder/Director of The Riverside School in Ahmedabad, India. Kirti Zala has led aProCh since 2011.