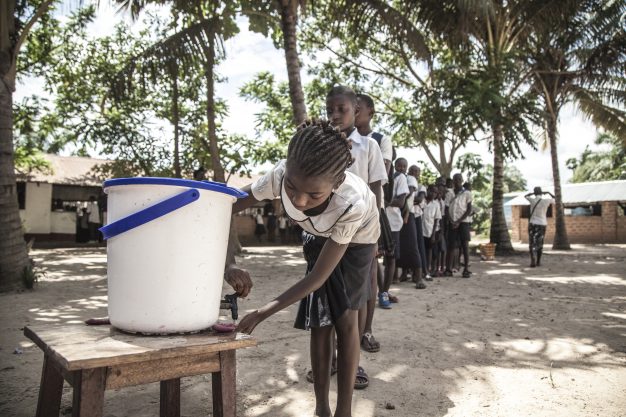 UNICEF: Children must be central to Congo Ebola outbreak response

UNICEF is warning that children are still at high risk of contracting Ebola in the latest outbreak in the Democratic Republic of the Congo (DCR). The charity says it is essential that their health and well-being are prioritised by the agencies responding.

Prevention efforts are being stepped up in schools across all three affected health zones. This includes on-going efforts to install hand washing units in 277 schools and supporting awareness raising activities reaching more than 13,000 children in Mbandaka, Bikoro and Iboko.

Dr Gianfranco Rotiglano, UNICEF Representative in the DRC, said: “Schools are crucial for engaging children and their communities in the fight against Ebola. That’s why UNICEF is putting in place measures to minimize the risk of transmission in schools, including temperature taking and handwashing.”

The charity also says it is concerned about the wellbeing of children with family members who have contracted the disease. “Children whose parents or caregivers die of Ebola or who live in isolation because they had contact with an infected person, need psychosocial support to help them cope,” added Dr. Rotigliano.

Previous Ebola outbreaks have demonstrated the need for social workers to identify and assist vulnerable children. Twenty-two psychosocial agents trained by UNICEF and its partners are providing assistance to families that are affected by the Ebola outbreak, while UNICEF is also supporting 23 families and their children who have relatives infected with Ebola by supplying household kits and food rations.

This is the ninth Ebola outbreak in the country since 1976. UNICEF is supporting the DCR’s Government in its coordination of the response both from the country’s capital Kinshasa as well as in the affected area. UNICEF has so far sent supplies including 45 kg of chlorine, five sprays, 50kg of soap and 28,000 water purification tablets to the area, as well as 600 posters and 6,000 leaflets to educate affected communities.