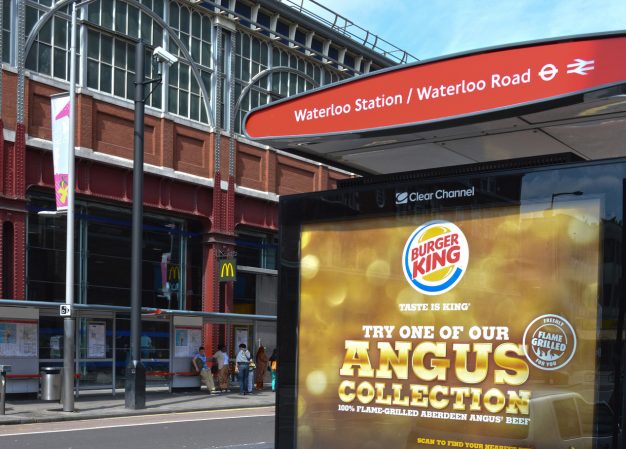 Sadiq Khan, the Mayor of London, wants to ban all junk food advertising on the city’s transport network to help tackle the ‘ticking timebomb’ of child obesity.

Health campaigners are backing the Mayor’s plan for the capital, which has one of the highest concentrations of overweight children in Europe. Almost 40 per cent of youngsters aged 10-11 are deemed to be obese.

Khan says it is a ‘scandal’ that so many children are overweight or obese in a city as prosperous as London, and he is calling on the Government to treat the issue as a priority by joining him in the fight against child obesity.

As part of the ongoing Draft London Food Strategy, the Mayor is seeking views on radical proposals to ban advertisements for unhealthy food and drink that are high in fat, salt or sugar across the entire Transport for London (TfL) estate, including the London Underground, buses, trains and even bus shelters, as part of a package of measures. Children from poorer areas of the capital are disproportionately affected, with young people in Barking and Dagenham almost twice as likely to be overweight as children from Richmond.

Research by the National Centre for Social Research and Cancer Research UK has shown that advertising of unhealthy foods – particularly when aimed at children – creates extra pressure on children and families when it comes to choosing what to eat and drink. He has also proposed a ban on new hot food takeaways opening within 400 metres of schools as part of his draft London Plan.

“Child obesity in London is a ticking timebomb and I am determined to act,” says the Mayor. “If we don’t take bold steps against it we are not doing right by our young people as well as placing a huge strain on our already pressurised health service in years to come.

“It can’t be right that in a city as prosperous as London that where you live and the income you have can have a massive impact on whether you have access to healthy, nutritious food and your exposure to junk food advertising. The Government needs to step up and join this fight against child obesity, so we can achieve real progress – not just in London, but across the entire country,” he adds.

The Mayor will hope that the plan has the success of a similar scheme in Amsterdam, which introduced a ban on adverts for unhealthy food on its own transport network at the start of the year. As part of a series of measures in the city, it has seen child obesity fall by 12 per cent overall since 2012.

Among those backing Khan’s stance is Professor Dame Sally Davies, Chief Medical Officer for England and Wales: “The evidence is clear that although it is not a silver bullet, restricting the amount of junk food adverts children are exposed to will help reduce obesity. Children are inundated with adverts for unhealthy food so this is a really encouraging move and a bold step in the right direction.”

Support for the ambitious scheme has also come from:

Jamie Oliver, TV chef and child health campaigner: “This is a game-changing moment, protecting kids from relentless junk food advertising on their daily journeys to school and around our amazing city. Putting their health first shows others what strong leadership looks like. London now has the most overweight and obese children of any major global city. Sadiq is starting to use everything within his power to tackle this head on. This surely must give Mrs May and her cabinet inspiration to do the right thing, be bold, be clear, and pull every lever they can to protect all British kids. Now is the time!”

Professor Russell Viner, President of the Royal College of Paediatrics and Child Health: “Obesity is having a huge impact on communities up and down the country, particularly those living in deprived areas, and one of the leading contributors for its growth is advertising. We know junk food advertising influences children’s food choices and children from deprived communities are more likely to be exposed to junk food marketing.

Chris Askew, Chief Executive of Diabetes UK: “With more than one in three children across England either obese or overweight by the time they leave primary school, it’s clear that we need bold and far-reaching action to give young people the best possible chance of a healthy future. We look forward to the outcome of the consultation, and hope that this forward-thinking step from the Mayor of London inspires Government to look at the broader issue of junk food advertising – including on TV at peak family viewing time.”

The consultation is open until July 5