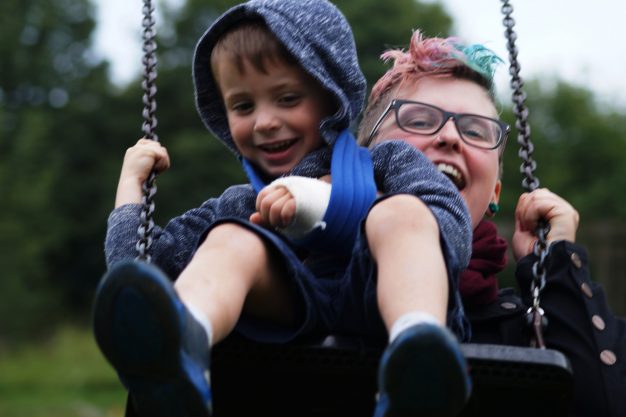 Asthma is associated with childhood fractures for boys, but not girls, underlining the importance of bone health education says Cheryl Critchley, a writer for the University of Melbourne’s research publication platform, Pursuit.

It is no secret that asthma causes breathing difficulties that can be life threatening. Globally, one in seven children has asthma that is usually controlled with drugs – most commonly inhaled corticosteroids. Wheezing and asthma attacks are often traumatic and can result in hospital admission.

Any parent of a child with the condition is familiar with the feeling of dread when their child is short of breath. If that wasn’t enough to worry about, important new research has underlined the association between asthma severity and the likelihood of fractures. The Victorian study, the world’s largest of its kind involving children, found that independent of age, boys with a recent wheeze or who had 1-3 recent wheezy episodes, were 30 per cent more likely to fracture a bone than boys who had not experienced a wheeze.

The same association was not found in girls, although older girls with asthma did have an increased risk of fracture. University of Melbourne research fellow Dr Sharon Brennan-Olsen says the results highlight the need for bone health education for this potentially vulnerable group.

“Given the number of children with asthma, we really need to promote bone health for them,” she says. “What we do in early childhood determines what could happen in later life, and whether those children develop musculoskeletal problems.”

The authors speculate that girls may have less fractures due to faster maturing bodies and lifestyle differences, such as the types of sports activities, and/or differences in risk-taking at certain ages. “Boys’ bones are less developed than girls’,” says Dr Brennan-Olsen. “Girls have the greatest bone mass accrual when aged 11-15 years, whilst for boys that bone mass is accrued later (14-15 years).”

She says the study is significant due to its size, comprehensive asthma information, use of radiological evidence to identify fractures (rather than parental reporting), and inclusion of an entire regional population. “It is larger and stronger than previous studies,” she says.

Published in the Journal of Paediatrics and Child Health, the project investigated associations between asthma severity and radiologically-determined fractures. It collected data from parents at 91 primary schools in the Barwon Statistical Division in south-west Victoria, covering 16,438 children aged from 3-14.

Researchers from the University of Melbourne, Deakin University, the Australian Institute for MSS, Murdoch Children’s Research Institute and Barwon Health used data from the 2005 Barwon Asthma Study and linked it with the Geelong Osteoporosis Study Fracture Grid fracture register.

The team, including Elizabeth Degabriele, and Professors Julie Pasco and Peter Vuillermin, identified 961 fractures sustained by 823 children in the study region –wrist injuries accounted for 52.3 per cent. They then investigated associations with asthma symptoms and severity and how many times medical attention was needed for the asthma.

Dr Brennan-Olsen adds that generally speaking, the underlying disease processes of asthma may negatively influence bone development, as the associated inflammation can lead to bone loss by interfering with mechanisms in bone formation and resorption processes. “Therefore in boys and girls with asthma, their fracture risk may increase due to the inflammatory nature of the disease interfering with bone formation and resorption,” she says.

Commonly prescribed inhaled corticosteroids have already been associated in research with decreased bone mineral density in children. But this study found that they did not influence the association between asthma and fractures.

“We looked at asthma symptoms, severity and the number of times medical attention was necessary,” Dr Brennan-Olsen says. “Even though we know that corticosteroids influence bone quality, they did not fully explain the association.”

Dr Brennan-Olsen says among other things, good bone health requires adequate dietary calcium, vitamin D through controlled sun exposure, and regular physical activity. She says some people with asthma wrongly believe they cannot exercise.“However, recommended guidelines indicate that regular physical activity is an important part of good asthma management, in combination with effective use of relievers and preventers, unless that person is already unwell,” she says.