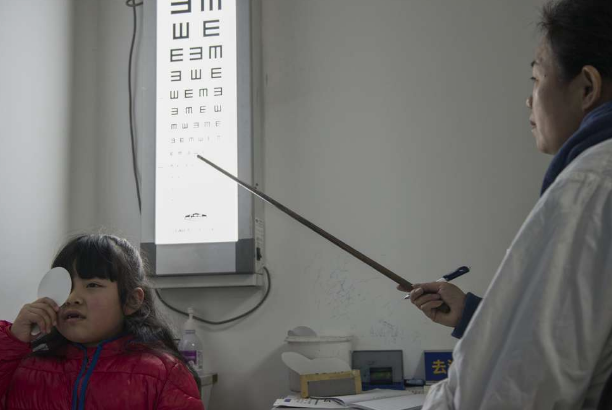 Children with eyesight problems in Chinese cities could reap the benefits of an inspiring new volunteer service. The Shanghai Eye Love Service Center is the brainchild of Gong Yi, who is using her own experiences of eye damage to help youngsters avoid the same problems.

As a finance manager, Yi stared at computer data day after day, month after month. Slowly, the excessive screen time began to compound her already-damaged eyesight, and eventually she required surgery to treat cataracts and severe myopia.

It was after this treatment that she began to think that maybe she could draw on her experience to help others avoid the same problems. So with the help of a foundation in Beijing, she founded Shanghai Eye Love Volunteer Service Center.

Designed to help children up to the age of 10, the centre trains volunteers to give free courses to children in Shanghai and several other cities in China. Its ‘Little Eye Man’ project was selected recently one of the top 10 charitable services by the Shanghai Civil Affairs Bureau.

“I didn’t form good habits to protect my eyes when I was a child,” Yi told English-language Chinese magazine Shine. “And the damage was irreversible. Now two years after my surgery, I feel that my eyesight has worsened again.”

“Eye health is very, very bad among Chinese children,” she added. “Recent research by the Ministry of Education shows that half of children under eight have eyesight problems.”

Describing what she called ‘the grade-3 curse’, this refers to the fact that many third-grade students are found to be near-sighted. Yi believes the problems may be longer standing and simply tend to come to the fore in primary school.

The service centre has developed what it calls a ‘magic kit’ to promote better eye health. It involves a set of shaded boards that help children learn what level of illumination is suitable for reading and doing homework, a board game to teach them healthy eye-care habits, some tip cards and a journal. The courses last around three hours, and are given by volunteers including some from the EYEducate Club at the Shanghai American School.

Yi believes that every child could function as a ‘superhero’ to help, correct and remind each other and even younger children about eye care, so that healthy habits are formed at an early age.

“After all, a habit can stay with a person for a long time, even a lifetime,” she added.

The World Health Organisation (WHO) says that China accounts for about 18 per cent of the world’s blind people. It is estimated to have the largest number of blind people in the world – around five million.

Major causes of blindness in China include cataract, cornea diseases, trachoma and glaucoma. WHO says that blindness among the country’s children is mainly caused by Vitamin A deficiencies, measles, conjunctivitis in newborns, congenital cataracts and retinopathy of prematurity.

The Chinese Government has embarked on a major public health programme aimed at tackling eyesight health, particularly amongst children, and is working with various non-governmental development organisations (NGOs) to support better eye care, including the Amity Foundation and the Hong Kong-based Asia Foundation for the Prevention of Blindness.