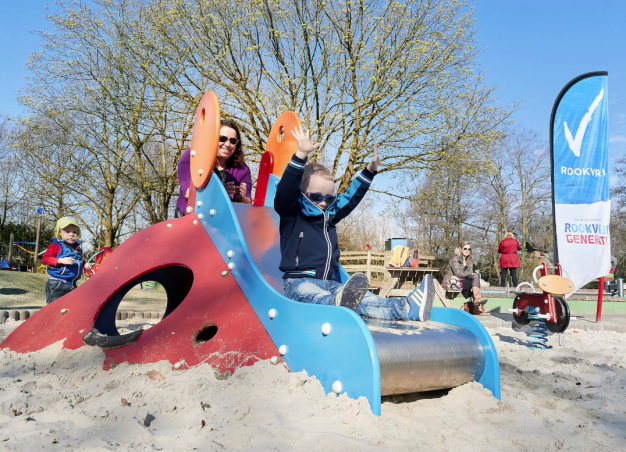 The Dutch ‘smoke-free generation’ movement which works to protect children from cigarette smoke has seen twelve more primary schools sign up to a campaign which is beginning to heavily influence municipal policies.

‘Rookvrije Generatie’ is an initiative between the Heart Foundation (Hartstichting), Dutch Cancer Society (KWF) and Lung Foundation (Long Fonds), and aims to ensure children are protected from birth right through all stages of their childhood.

It works with national and regional partners to help schools, playground providers and sports clubs raise awareness of the dangers of smoking and the damage that smoke can do. The latest schools to join the movement are in the northern part of Limburg province, which is in the south west of The Netherlands.

A ceremony at Passe Partout Primary School in Tegelen saw Harry Pouwels, a lung doctor and Ambassador of the Rookvrije Generatie, present the twelve schools’ representatives with signs promoting the organisation’s goals which they can display on their non-smoking schoolyards. The schools got on board after being approached by the regional arm of the Government’s Municipal Public Health Service (GGD).

The campaign has also handed out its latest Rookvrije Generatie awards recognising the work being done by municipalities and their representatives to promote the no-smoke message. A total of 58 initiatives were nominated in six categories, of which 18 went on to receive a national award.

Eric van der Burg, the Mayor of Amsterdam, who received an award on behalf of the city’s efforts, said: “We are happy with this, a nice reward for the efforts of our municipality. We hope that the movement that is committed to the Smoke Generation in the Netherlands will increase and that in the future all 380 municipalities will participate.”

Floris Italianer, Director of the Heart Foundation and Chair of Nederland Rookvrij, said: “More and more people, organisations and municipalities are committed to smoke-free places for children, from playground to school and sports club. They realise that smoking causes up to 20,000 deaths every year and we have to protect our children. The hockey club Malbergen from Arnhem is a wonderful example of this. They decided to become smoke-free in one go, successfully.”

The City of Utrecht announced at the awards it was also joining the alliance. Victor Everhardt, Mayor of Utrecht, said: “We encourage the creation of smoke-child environments, such as sports fields, playgrounds and schoolyards. It is important that children can grow up smoke-free. Together with parties in the city, we are committed to this.”

The Klein Zwitserland play park in Venlo, the Stedelijk Lyceum Kottenpark in Enschede, and HCM Arnhem also received an award for their efforts for the Smoke Generation. Mohamed Taheri, of The Hague municipality, was also praised for his efforts to make all playgrounds in the city smoke-free. Around 20,000 people die each year in The Netherlands from smoking and several thousand from passive smoking. Smoking is the country’s number one cause of illness and death, yet every week hundreds of children are still becoming addicted to smoking in the Netherlands.