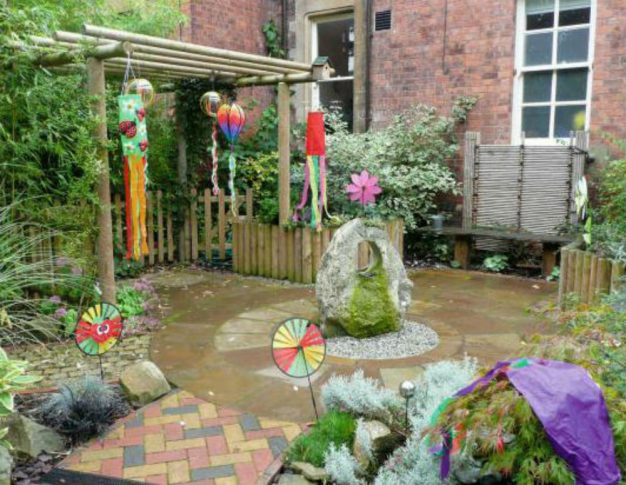 A tactile garden at a school for the blind in Worli, India

Published on 21-02-2018 at 09:00
Designed by architect Rahul Kadri’s firm, the garden at Worli’s Happy Home and School for the Blind will serve both as a play area and an open-air classroom. About 50 children gathered at a newly refurbished space in Worli in India.

The tactile garden, monikered ‘A Ray of Light’, is designed by Rahul Kadri’s firm IMK architects. Incidentally, his father, the renowned architect I M Kadri, designed the school in 1971. “We wanted to create a variety of experiences for the children by using several of tactile forms, shapes, and sizes. We tried to put ourselves in their shoes,” said Rahul Kadri.

Designing for the senses

The aim of the design was to create a sensory educational/recreational space, taking into account four senses – smell (fragrance), vision (color, luminosity, shape, and pattern), touch (textures, friction) and sound (movements on touch or handling). The brief provided to the architects was simple – to create a play area and outdoor seating for children in the backyard of the school that until last April was a dark patch of rubble. “This area has been created in EPDM material (ethylene propylene diene monomer rubber) for children who are partially or completely blind. So more than color, we focused on different textures and material, and how they feel,” said Kadri’s colleague, Bhumika Chudiwala.

“If you walk in, the main pathway has a different texture, and at one of the turns, different tiles are used to indicate different directions. Even the entrance area has a different tile so that once they have entered an area, they can distinguish it from the previous one.”Some of the floor tiles have raised circles, “like those at road crossings and tube stations abroad,” said Banaji. “Others are embellished with polished pebbles. Lessons in how to recognize the feel and the sound of a surface beneath their feet as well as more conventional classes make the garden an extension of the school’s classrooms.”

The school, said Banaji, had a much smaller tactile garden in the past. “But it was located in front of the school and the location was noisy and polluted,” she said. “This area (nearly 2400 sq. feet) was lying empty. And Dr. Hamied, who’s one of the school’s greatest supporters, encouraged us to open a garden here.” Banaji shared the idea with Kadri, whose team worked on the garden for almost eight months. The children’s play area will have equipment such as a merry-go-round, see-saw, swings, and slides. The outdoor seating area has some textured surfaces and will also double up as an open-air classroom.