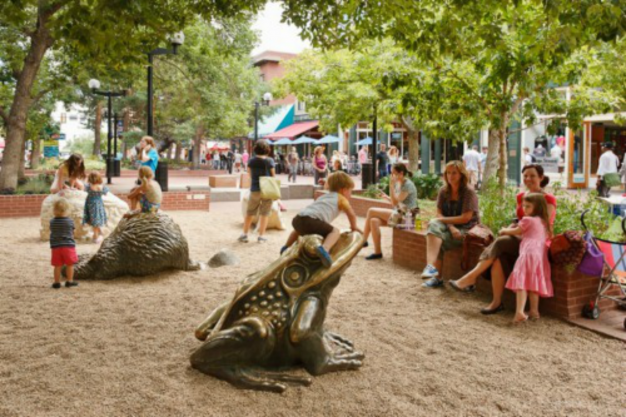 Are these the most child friendly public spaces?

Canadian Urbanist, Jillian Clover of This City Life invited her readers to share their favourite child friendly public spaces. She shares some of the results here.

Every weekday, I pass through Vancouver’s main public space, Robson Square, and I see no children (lately, I just see a proliferation of pot vendors, but that is another story). I mentioned this last summer when I met with child advocate and urbanist Tim Gill. He had come to Vancouver to research how child-friendly city planning has been put into practice here. Vancouver receives a lot of accolades for being liveable and sustainable, but I would argue it is not designing its public spaces to appeal to children, especially in the downtown core.

Last month, I put a call out on Twitter asking my followers to share their ideas on child-friendly public spaces located in city centres. Here is a snapshot of some of the great responses I received:

The Darling Quarter opened in 2011 in Sydney’s harbour. It is a large mixed-use project anchored around a massive playground. The Children’s Playground features activities that promote learning and imagination for all ages, such as water games, climbing ropes, jumbo swings, slides, a flying fox, and a children’s theatre. It has since become one of the city’s most-visited destinations.

Houston’s Discovery Green is a 12-acre park located in the heart of the city. The park offers a multitude of activities appealing to children and adults. On weekends, a four-wheel “Art Cart” stocked with horseshoes, croquet sets, and other recreational equipment cruises the park. The park features a large water park and playground. It also includes many interactive art installations, like Los Trompos, a set of spinning tops dreamed up by Mexican designers Héctor Esraweand Ignacio Cadena ( pictured above). Musicians and performing artists offer noontime and weekend performances at the park’s amphitheatre. In addition, Discovery Green has a calendar full of kid-friendly events like Toddler Tuesdays, Young Writer’s Workshop, and Family Movie Nights.

Freiburg, located on the edge of Germany’s Black Forest, sounds like a dream city for children. In addition to providing pedestrian-only streets, the city features the Freiburg Bachle, little streams of water that flow through tiny canals fed by the Dreisam River. All along the edges of its cobblestone marketplace and surrounding streets, children wade through these canals, pulling little boats on strings, or cooling feet on a warm day.  Freiburg was one of the first German cities to close the city centre to traffic. Instead, the streets are treated as the city’s “carpet.” Geometric and flower designs, historic, cultural and business symbols, executed by traditional artisans emphasize the unique character of each street.

Opened in 2014, Waterfront Park is one of the last remaining, major open spaces on the San Diego Bay and has become a landmark for the city. The city paved a parking lot and put up a massive 12-acre park with plenty of water features, a state of the art playground, picnic areas, and garden rooms with distinct themes.

Boulder’s  Pearl Street Mall is a four-block pedestrian mall in its downtown historic district. The Mall has endless diversions for kids, including several play areas with loads of stuff for kids to climb on and explore, including little ‘pop-jets’ to dance around in. The streets, which are full of restaurants, bookstores, boutiques and sidewalk cafes, are often activated with seasonal art shows, craft fairs, musical presentations and street performers.

This article was first published by This City Life