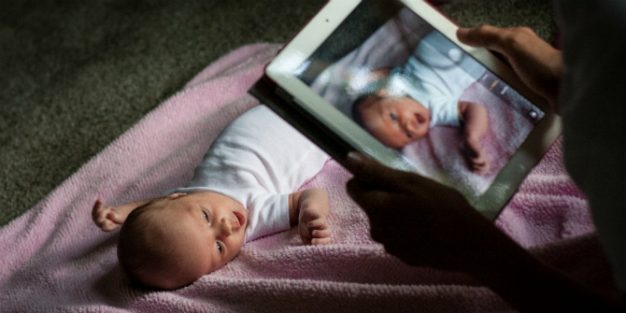 The average parent shares almost 1,500 images of their child online before their 5th birthday, a new study by Nominet, the UK domain registry reveals.

Parents who share information about their children online whether it’s a precious image or an anecdote are often accused of ‘sharenting’ and in some cases ‘oversharenting’. The term sharenting has become so popular that it is included in the Collins English Dictionary.

Every time we connect, post, upload or share something online we are creating a “digital tattoo”. Which is why Juan Eriquez urges us to consider the “permanent effects of digital sharing on our personal privacy”.

In The Netherlands, a company Koppie Koppie warns, “If you’ve ever put pictures of your children online, there’s a chance that we’re selling them here on one of our coffee mugs.”

By using free images that are uploaded on Flickr under a Creative Commons license Koppie Koppie wants to illustrate how easy it is for strangers to profit from images parents upload and how hard it is to control how your images are consumed. In addition to encouraging parents to think twice before uploading pictures of their children, their aim is to also educate parents about sharing images under a Creative Commons license as it allows anyone to legally use your image for commercial gain.

In a Facebook post the German Police asked parents to stop posting photos of their children online. They even declared, “Children’s photos basically have no place on social networks. Because the Internet “does not forget” anything.” Instead, they encouraged parents to show and discuss the images in person with friends and relatives.

The Telegraph reports, “Under France’s stringent privacy laws, parents could face penalties as severe as a year in prison and a fine of €45,000 (£35,000) if convicted of publicising intimate details of the private lives of others — including their children – without their consent.”

Stacey Steinberg’s research as “a legal scholar, photographer, former child abuse prosecutor and mother” highlights how a parents “split-second decision” not only turns a private moment (negative or positive) into a public one but also can send a message to children that “sharing personal details about their lives is expected and appropriate”.

Steinberg, “encourages scholars, policy makers, and parents to reconsider the ways society views childhood and privacy in the digital age.” She further cautions any regulatory approach need “to strike a balance between protecting children online and respecting their independence as they grow up.”