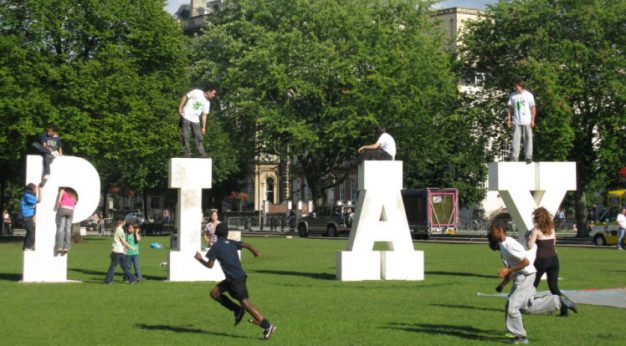 In the first part of this adaptation of his keynote presentation to the recent Child in the City International Seminar in London, Adrian Voce recalls the work of Dr. Stuart Lester (1951-2017) and his colleague, Dr. Wendy Russell, in helping to establish the case for an expansive national play policy for England.

I count myself as immensely privileged to have had as one of the main tutors for my Masters course at the University of Gloucestershire, the incomparable Dr. Stuart Lester, who tragically passed away very suddenly earlier this year.

Stuart not only pushed the envelope of our understanding of play and space – his research and taught modules encompassing philosophy, politics and a plethora of scientific perspectives – but he also somehow embodied the essence of his subject in how he went about his work: presenting serious, complex and profound insights with the lightest of often mischievous touches. His playful enthusiasm and energy are as much a loss to all those who knew him, as his huge contribution is to our field at large. 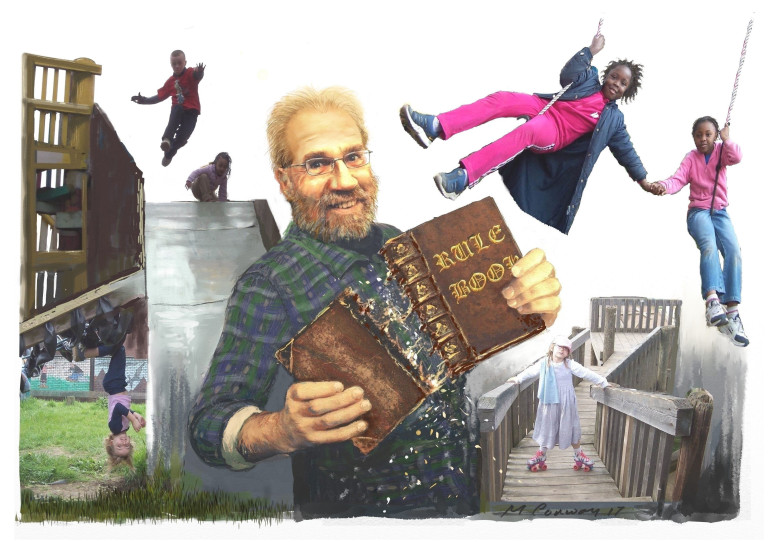 While we followed very different career pathways, Stuart always shared my conviction that children’s play was, or should be, a serious issue for public policy. If establishing a dynamic and congruent relationship between research, policy and practice is a fundamental triad for enlightnened progress in any field, then, along with his professional soul mate, Dr. Wendy Russell, he was the perfect ally for UK play policy advocates.

Play for a Change

One of Stuart and Wendy’s most influential publications– certainly in terms of play policy in England – was their extensive literature review of 2008, Play for a Change, which helped us to make an authoritative case for the government Play Strategy launched the same year. This impressively wide-ranging survey of scientific perspectives on play, and critique of the policy response to them, identifies certain key benefits that children derive from playing:

Pleasure and enjoyment and the promotion of positive feelings
Play, as an enjoyable experience, promotes positive affect, which in turn encourages further exploration, novelty and creativity.

Creativity
The key relationship between play and creativity exists in the flexibility of responses to novel and uncertain situations and the non-serious interpretation of a range of stimuli.

Learning
The primary benefits of play are found within the integration of motivation, emotion and reward systems rather than the higher cognitive aspects of brain development.

Attachment
Play has a central role, from the first moments of life through to adulthood, in developing strong attachments.

Place attachment
Just as children need strong social attachments, attachment to place may also be seen as a key adaptive system. The creation of a sense of place is vital not only to a sense of wellbeing but also to maintaining the quality and vitality of the environment.

To those seeking clear, empirical evidence of a direct causal relationship between children playing and their future life chances, as measured by academic attainment and long-term health outcomes, Play for a Change was not perhaps the Holy Grail. Indeed, Lester and Russell challenge, in no uncertain terms, the dominant discourse and its developmental paradigm, which privileges narrowly defined, future-oriented policy objectives over approaches that would pay greater attention to the wider conditions of children’s daily lives, and the space these afford for them to be who they are now – which means opportunities to play.

What caught the policy-makers’ eye within Lester and Russell’s research was the undeniable relationship between play and resilience. Their thesis, substantiated by a wealth of trans-disciplinary perspectives ranging from evolutionary biology to the new neurosciences, is that children’s resilience – their capacity, day-to-day and moment-to-moment, to adapt to their world and find ways to enjoy it – has a great deal to do with the time and space they are afforded to play. And the primary benefits of playing are immediate rather than accrued. This should be a reason to prioritise play in public policy – not to overlook it.