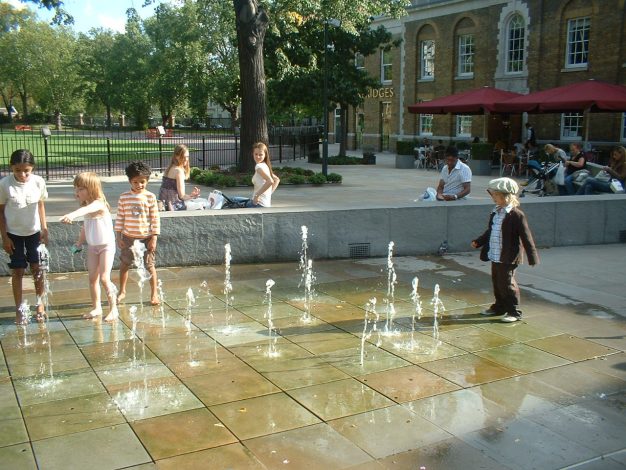 The Guardian newspaper reports that many of Britain’s largest cities are refusing to reveal information regarding the private ownership of seemingly public spaces, fuelling concerns about a growing democratic deficit within local city government.

A Guardian Cities investigation earlier this summer revealed for the first time the spread of pseudo-public space in London – large squares, parks and thoroughfares that appear to be public but are actually owned and controlled by developers and their private backers – and an almost complete lack of transparency over secret restrictions imposed by corporations that limit the rights of citizens passing through their sites.

The Guardian has since requested data on pseudo-public spaces, which are sometimes known as privately owned public spaces (Pops), from the country’s biggest urban centres beyond the capital. Councils were asked about the extent of existing pseudo-public spaces in their area and details of any upcoming development plans that will include such spaces in the future. They were also questioned on how local citizens could access information about pseudo-public spaces, and about the nature of any private restrictions imposed by corporate landowners which may prevent members of the public from holding protests, taking photos, or exercising many of the other rights they are entitled to on genuinely public land.

Out of 14 local authorities contacted, only two – Cardiff and Cambridge – provided some details of pseudo-public sites under their jurisdiction. Belfast and Edinburgh councils said they were unable to share that information. Other city administrations, including Manchester, Liverpool, Birmingham, Leeds, Glasgow, Nottingham, Leicester, Bristol, Sheffield and Newcastle, declined to comment.

Being able to know what rules you are being governed by, and how to challenge them, is a fundamental part of democracy

“It’s really shocking,” said Professor Richard Sennett, a prominent sociologist at the London School of Economics whose work explores the politics of urban development. “What are local councils so afraid of? Conditions could be placed on new developments that force the creation of real public space and full transparency about land ownership and public rights.

“But in Britain we’ve long had this attitude of appeasement towards developers. If planning authorities were strong, rather than constantly bending over backwards to show how development-friendly they are, they would find that the companies fall into line.”

The revelation comes as pressure mounts on the Mayor of London, Sadiq Khan, to use his forthcoming London Plan – which provides an overarching development strategy for the city – to push back against the creeping privatisation of public space. Following the Guardian’s initial investigation, national political leaders including Labour’s Jeremy Corbyn, the Liberal Democrats’ Vince Cable and Caroline Lucas of the Green Party all spoke out on the subject. Shortly thereafter, a motion was passed in the London Assembly urging Khan to take a firm stance on the issue.

“Being able to know what rules you are being governed by, and how to challenge them, is a fundamental part of democracy,” said Sian Berry, a London Assembly member for the Green Party who proposed the motion.

“Increasingly, London’s public space is in private hands and there is very little transparency around which individuals and groups can have access,” added Labour’s Nicky Gavron. “These are Londoners’ outdoor living rooms and it is appalling that access can be restricted.”

Several assembly members pointed out that City Hall itself is located on open but private land controlled by the sovereign wealth fund of Kuwait, which refuses to allow journalists to operate in the area without corporate permission.

The Mayor of London has vowed to establish new guidelines covering privately-owned “public” sites, designed to “maximise access and minimise restrictions, as well as enabling planners to establish potential restrictions at the application stage for new developments.”

But Gavron insisted that this was not enough. “The next London Plan should go further and establish real public transparency and accountability for setting rules to govern these spaces through the lifetime of developments, not just at the application stage,” she argued.

Along with the move of many local authorities to ‘marketise’ their parks and green spaces, the trend towards privatising public space should be a serious concern to advocates for child friendly cities. Children and young people are among the most vulnerable and dependent users of public space. They have a huge stake in the public realm of their communities, towns and cities; a right that is already under-recognised and under threat.

Children need access to, mobility around and affordances from the common spaces that bind their towns and cities together. This can only be delivered by concerted, joined-up public planning policy with transparent and democratically accountable rules for how space is conceived, developed, designed and maintained; not by selling off those rights and responsibilities to wealthy, invisible landowners.