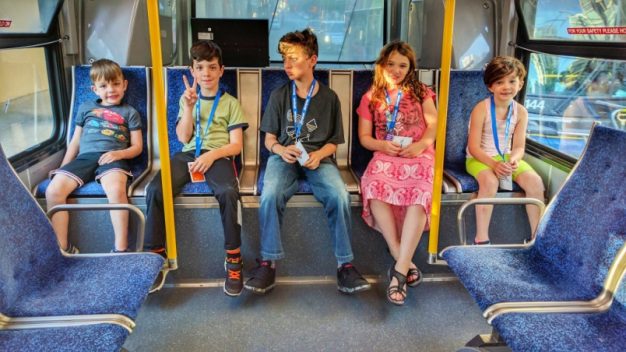 Making the case for children’s independence

Our latest guest blog from the Vancouver-based urbanist Jillian Glover highlights a particular example of how government has erected barriers to children’s freedoms.

When I launched my Kids in the City series a few years back, Adrian Crook was the first parent I profiled. He is a single father living with his five children in a downtown Vancouver condo. Since then, I have been following his blog and have always been impressed with the dedication he puts into exposing his children to the joys of living in Vancouver – a city where they have access to nature, culture and excitement, while also being able to easily walk, bike, car share and take public transit to get around and explore.

Last year, Adrian began teaching his older children (ages 7, 8, 9 and 11) how to ride the bus together to get to school.  “I’ve happily invested countless hours riding the bus with them”, he says, “coaching them and answering their questions to ensure they’re capable transit riders…..Our 45-minute bus ride is straightforward. It begins with a bus stop visible from my window and ends at a stop directly in front of the kids’ school.

The kids have even become friends with the bus drivers.

“We’ve had no issues over the last two years, unless you count losing a cell phone or getting off a stop too early (their GPS-tracked cell phones easily resolved that). The kids have even become friends with the bus drivers.”

Unfortunately, this all came to a halt when our province’s Ministry of Children and Family Development received a complaint from an anonymous citizen. It has since revoked Adrian’s children’s right to ride the bus without a guardian. According to his recent blog post about the incident:

“The Ministry had checked with their lawyers “across the country” and the Attorney General, and determined that children under 10 years old could not be unsupervised in or outside the home, for any amount of time. That included not just the bus, but even trips across the street to our corner store, a route I can survey in its entirety from my living room window.“

The whole situation is enough to make one lose hope that we will ever be able to give our children the freedom of childhood that we experienced. A time when we could ride our bikes freely through the neighbouhood, play with our friends until it got dark outside, and walk to and from school – all without the watchful eye of an adult.

Today,  children are within 10 metres of a guardian at all times, usually indoors due to fears of traffic and strangers, or over-scheduled in extra-curricular activities.  This helicopter parenting trend encourages sedentary lifestyles and places children in a state of constant fear and anxiety that will have long-term negative consequences for society as a whole. Have we lost faith in the responsibility of all adults to look after children in our communities (this means watching over them, not ratting out those that are free range)?

Allan Richarz, a privacy lawyer in Toronto, posted an editorial on CBC today about the issue: “If one ever wondered from whence helicopter parents sprang, it would seem that they take flight from the hangar of the government nanny-state. Not surprising, given that a government, with an inclination toward the Big Brother-esque, has a vested interest in creating a generation of anxiety-ridden children, helpless and fearful of their own shadows.

“After all, who will help them deal with that anxiety and the other perils of childhood but the government, of course……Incessant helicopter parenting and/or state intervention deprives children of important learning experiences and instead fosters a sense of learned helplessness.”

Adrian is currently planning to legally challenge the decision by the Ministry of Children and Families. You can support his legal campaign here.

This article was first published on This City Life