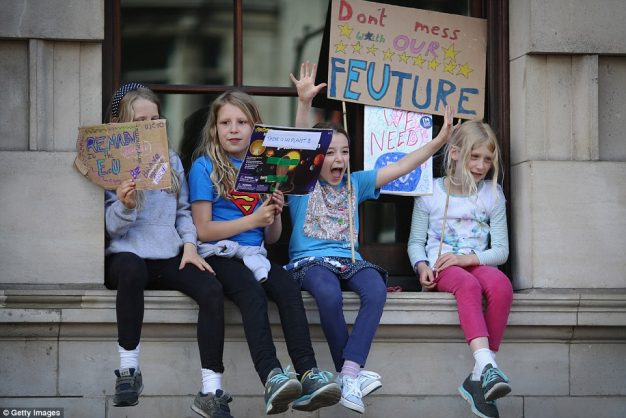 Scotland’s children’s commissioner and leading children’s charities this week joined a rally at Westminster to demand that the UK government and parliament engage with children and take their rights seriously in Brexit negotiations.

Representatives from Scotland’s children’s sector, including the country’s children and young people’s commissioner, joined a mass lobby of Parliament on Wednesday where hundreds of MPs were asked to fully protect the rights of EU citizens in the UK and British citizens in Europe after Brexit.

The children’s group then told a special parliamentary event that children must be heard and their views sought on Brexit. The group discussed with parliamentarians the possible implications of Brexit for children across the UK, including plans for child-related EU law within the EU Withdrawal Bill, and the social and economic rights of EU migrant and non-EU nationality children in the UK.

Despite inheriting the full impact of Brexit as they grow up, children have been excluded from discussions about it

The commissioner, Bruce Adamson joined representatives of Together, the Scottish Alliance for Children’s Rights and Children in Scotland at a House of Commons event, Children’s Rights Following Brexit. Amy Woodhouse of Children in Scotland also spoke at a rally outside Parliament. The group, which is coordinating to raise the profile of children’s rights and Brexit at the UK-level makes three key calls:

Commissioner Admamson,said: “Children and young people in Scotland, and across the UK, have the right to contribute their views to the Brexit negotiations and should be given meaningful opportunities to do so. Information on how Brexit could affect their lives should be provided in a child-friendly format and then their views sought in both formal and informal ways.

“The EU has… (guaranteed) … direct entitlement for children in areas including child migration, asylum, child protection and paediatric medicine. Legislation that keeps children safe covers child trafficking, child abduction and child sexual exploitation. Much of this has been transposed into domestic law and this has to continue post Brexit. But what is often forgotten is the cross-border EU activity that supports all of this”.

Children in Scotland’s Chief Executive, Jackie Brock, said: “According to YouGov, 71% of 18-24 year-olds in the UK voted to remain in last year’s referendum. The voices of this generation, 16- and 17-year-olds who were disenfranchised from voting in the referendum, and younger children, are being sidelined in the Brexit debate. Yet it’s they who will most feel the impact of our withdrawal from the EU. There is a clear democratic deficit being reflected in the Brexit negotiations. We need our politicians to take notice, demonstrate awareness, and bring children’s voices into the heart of this debate.”