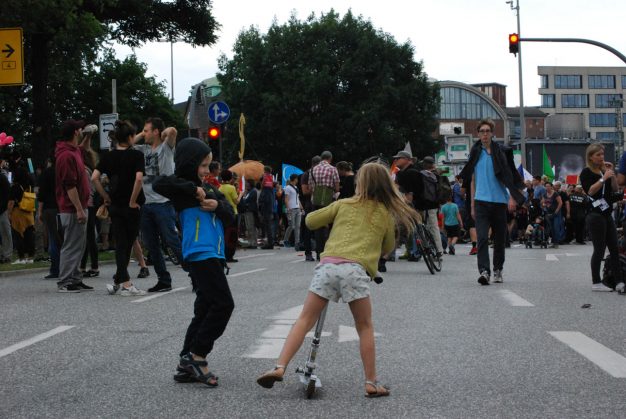 The recent G20 summit in the German city of Hamburg made headlines around the world as people listened with a mixture of hope and dread for clues about the new world order, and watched as the host city struggled to contain violent protests. In this personal blog, the historian, anthropologist and Hamburg resident Darijana Hahn reflects on the summit’s impact on the public life of her city – not least for that of its children.

Two weeks after the G20 summit in Hamburg, the debates are still raging and look set to continue for a long time yet – as will some of the repercussions. Not a day goes by without heated discussion and opinionated commentary dominating the media. This was a mega event; its impact sending a shockwave through the public life of this usually quiet German city, my home.

On the Friday evening of the summit, while the 20 key politicians and their partners (with the pointed exception of President Erdogan of Turkey) listened to a performance of Beethoven’s ubiquitous Ninth Symphony, a full-blown riot raged in the famous Bohemian quarter of Schanzenviertel.

From a panoramic viewpoint opposite the shining, recently-opened Elbphilharmonie concert hall, one could see and hear the drama unfolding: close to the left bank of the River Elbe, a flotilla of police boats swayed on the current – there to protect the ‘leaders of the world’ from people whose city they had descended upon; on the right bank, a big cloud of black smoke billowed into the sky above the Schanzenviertel. The soundtrack? Not Beethoven – whose ode to joy reached only the ears of those in power and privilege – but roaring helicopters and screaming sirens. It was tempting to adapt a famous line from radical rockers Midnight Oil: ‘How can you listen, while the earth is burning?’

And while the Elbphilharmonie and its elite patrons were guarded like a maximum-security unit turned inside out, the Schanzenviertel was seemingly left to burn. It appeared that the authorities were taken by surprise that this 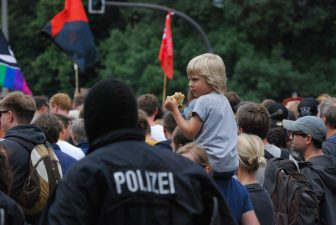 centre of anti-establishment-culture should be a focal point for protest. What police there were, seemed content to watch as hardcore anarchists in black masks (eerily similar to the police balaclavas) torched and smashed cars, set fire to barricades and looted local shops. Images of these violent scenes were sent around the world; seen by critics as evidence that this kind of super-summit could not be safely hosted by a city such as Hamburg.

Questions about security have dogged every G20 summit in recent years, but in Hamburg they became especially trenchant when it became known that the venue would be the Hamburg Fair, an area right next to the one quarter where the entire population would most likely disapprove of the politics of this elite group, at a time when democracy is seen to be under the gravest of threats.

Indeed, the city had been under pressure not to host the summit, but Mayor Olaf Scholz had shrugged off the warnings of riots with comments that G20 would be no more a threat than the annual city harbour celebrations – infamous for blocking streets and causing traffic jams; but not for burning and looting. 20,000 police were ordered into the city, with the rationale of keeping it safe. 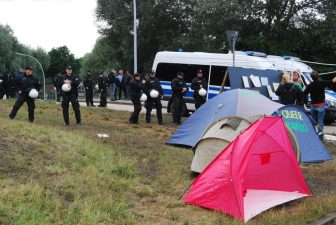 But who was afraid of whom? One week before the beginning of G20, one could hear helicopters everywhere, disturbing the whole atmosphere of the city. Police patrolled in heavily armed vehicles, and stood menacingly on every corner – creating not just the impression but the feeling of some totalitarian state. Such feelings turned to reality as hundreds of police broke up a planned – and fully legal – protest camp in a city park, apparently just to demonstrate their power.

Unexpectedly – not least to the police and the government – in the midst of this dystopian nightmare, a kind of utopia emerged. There was huge public solidarity with the campers. Theatres and churches invited them to camp on their sites, declaring, “Sleeping is not a crime” and “Yes, we camp”. Hamburg, from under the dark, dead cloud of heavy-handed authority, suddenly became alive and colourful, as tents popped up all over the city, transforming our concept of public space. People started remarking how nice it would be to be able to camp in the middle of the city – not only on remote official camp-sites.

This unfolding utopian wave was then further enhanced, quite incidentally, by the unfamiliar absence of cars from many of the city’s streets. Blocked to protect the leaders of the world, and at the same time cutting off many well-used daily routes, Hamburg’s streets all of a sudden became accidental places to enjoy: to cycle, to sit, to chat with ‘strangers’.

Emerging from this reclamation of the public commons – quite unforeseen by the authorities – came the children.

Emerging from this reclamation of the public commons – quite unforeseen by the authorities – came the children. In an almost mythical counterpoint to the weaponry and coercion of the state, hundreds, probably thousands of children, without invitation or licence, saw their opportunity to conquer and colonise Hamburg’s public spaces. 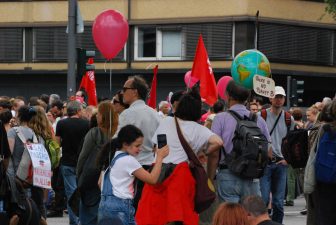 Climbing the lampposts, skipping across the lines in the middle of road, or just sitting on the shoulders of their demonstrating parents, children saw the otherwise threatening transformation of their city as simply a rare opportunity to come out and play.

The effect on the community was almost magical. With adults and children of many backgrounds and ethnicities mixing and mingling on the public streets, this city under siege suddenly seemed like nothing so much as the scene of Brueghel’s famous painting, Children’s Games: everybody playing, enjoying being together, feeling part of a big community. People were bound together not just by the protest, the feeling of injustice, the wish to make the world a better place; but the opportunity to manifest and live it, here and now.

This spontaneous utopia was catered for in the communal spirit, as many left-wing and environmental groups offered free meals and drinks to those gathered together, accepting only donations from those able to pay whatever they could afford. Eating, listening to music, exchanging information with friends and strangers alike – all the time enjoying the liberated energy of children playing – one felt the true nature of the city being reborn, proud of its humanity. In those moments, hours and days, Hamburg reminded itself that its strength is not in its shiny new palaces of elite culture, or its saleability as a venue for the rich and powerful, but as a community of people realising the potential of its shared spaces, common values and collective voice.

Many of those same left-wing groups that fed and informed the overwhelmingly peaceful protests at the G20 summit are now under investigation for somehow having inspired or even hosted the violent riots that so marred the city. The radio and TV debates about who was to blame and what can be learned rage on. The longer-term legacy for this city may be that the real Hamburg came together – children and adults both – and reclaimed her space, however briefly, for her people.