An authoritative new study has found that the EU is failing to make progress on social inclusion and that children are among those most affected by poverty. Adrian Voce reports.

A new report by Eurostat, Monitoring social inclusion in Europe (2017 edition) has found that the EU has not made any progress towards achieving its ‘Europe 2020’ social inclusion target, adopted in 2010, of lifting at least 20 million people from poverty and social exclusion by 2020.

The report also finds that in three of the four clusters of countries, people living in couple-headed families make a far larger contribution than those living in lone-parent families to the total number of people living in hardship and that families with children make up 37 % of the poor population in the Nordic and Eastern European countries, and 44-45 % in the North-West and Southern countries. Not all of these individuals are children, since their parents are also counted as part of this total; nevertheless, says the study, the figures provide a good indication of the levels of child poverty on the continent.

The current levels of poverty and social exclusion are not acceptable in 21st century Europe. Everybody needs to put their shoulders to the wheel.

The report aims to contribute to an understanding of some of the substantive challenges facing ‘Social Europe’ and to the development of methods that can bring about new insights into issues related to income, deprivation and work. It make recommendations improvement in relation to both data production and data analysis. Therefore, say the authors, ‘this volume is intended not only for policy-makers and statisticians but also for all those concerned about the impact of economic, employment and social policies on people’s lives and about the ways in which the social dimension of Europe – including the monitoring of the EU social inclusion target — could be strengthened’.

In her foreword to the book, -Marianne Thyssen, the EU’s Commissioner for employment, social affairs, skills and labour mobility says, ‘The current levels of poverty and social exclusion that we are witnessing today are not acceptable in 21st century Europe. Everybody together — the European Commission and all 28 Member States — need to put their shoulders to the wheel’. 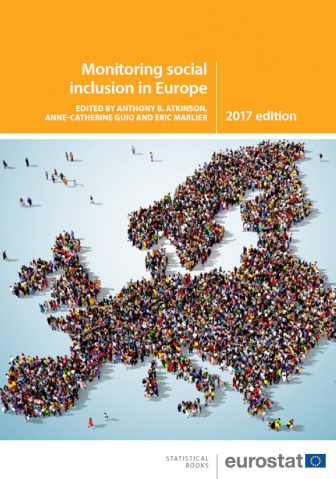 Edited by Anthony B. Atkinson, Anne-Catherine Guio and Eric Marlier, published by Eurostat.

The full report can be downloaded here