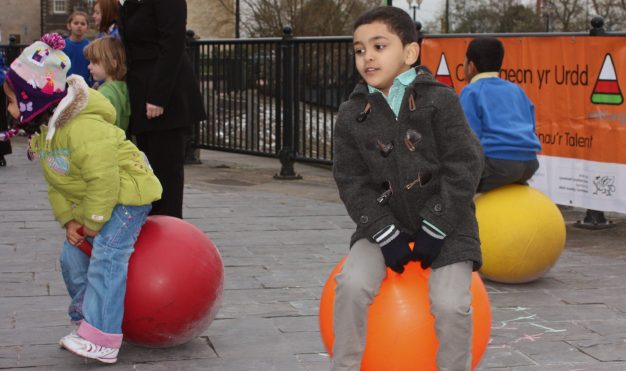 Play Wales has published its Manifesto for Children’s Play ahead of the UK general election on 8 June. Adrian Voce casts his eye over it.

The national play advocacy body, Play Wales has this week published its Manifesto for Children’s Play setting out four different policy ‘asks’ of the parties competing for votes in the UK general election on 8 June.

In a statement accompanying the publication, the organisation says it is ‘calling for the next UK Government to prioritise provision for play’. It goes on to say, ‘We are asking all political parties to recognise that having time, freedom and good places for playing are of paramount importance to all children, their families and the wider community’.

Play Wales cites evidence that play interventions are just as effective as sport and PE programmes in boosting physical activity levels and helping to combat childhood obesity; and that they also boost children’s resilience, ‘engage positively’ with their school and the wider environment, and ‘encourage neighbourliness’, thereby improving community cohesion.

Praising the Welsh government* for taking ‘an international lead in adopting a Play Policy and more recently legislating for children’s play in Wales; the manifesto calls on the UK government to follow this lead and for the competing parties to therefore make policy commitments in four specific areas:

In neighbourhoods: taking steps to greatly reduce traffic and also to remove some of the bureaucratic barriers to road closures for street play

In parks and public play space: investing in a programme of ‘cross-sector training for those who plan, design, build and manage our communities so as to create more child-friendly public spaces.

In schools: to recognised the importance of play and break times (recess) and of ensuring the play value of after school provision

Play Wales maintains that policymakers ‘can be confident that investing in these asks will result in improvements in children’s health and wellbeing, and hence a reduction in the pressures on the National Health Service and the public purse. ‘ It also challenges that ‘the level of investment needed would be modest, cost-effective and support local authorities to comply with their statutory duties to assess and secure sufficient play opportunities for children in their areas’, a requirement under the Rights of Children and Young Persons (Wales) Measure of 2011.

Since 1999, the directly elected Welsh Government has had devolved powers for child policy, including education and children’s play. It is also responsible for policy in areas such as local government, housing, highways and environment, while the UK government has overall responsibly for economic policy, which naturally has a bearing on all other policy areas. The General Election on 8 June is for the UK Parliament, and will determine the next UK Government, not the Welsh Government, which has its own direct elections.

The Manifesto for Children’s Play, published by Play Wales, can be downloaded here