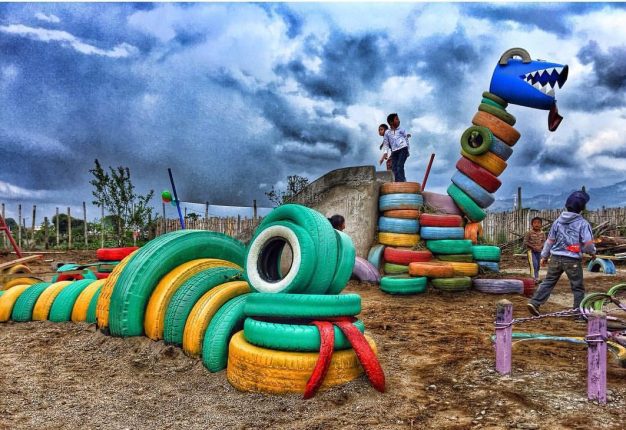 Inspiring playgrounds where children need them most

With policy and funding for children around the world ever more narrowly focused on their formal education, often at the expense even of school playgrounds, Victoria Derr looks at a project that supports local communities to redress the balance by using to-hand materials and the inspiration of their – and their children’s – own culture.

There is currently a crisis in the world that not many people are talking about. Around 43% of children under 5 years of age, in low and middle income countries (that’s 250m), are failing to reach their full development potential (The Lancet, 2016). And two-thirds of primary age children are failing to meet the minimum benchmarks of learning after four years of school (UNESCO, 2014). However, longitudinal studies completed over the last 50 years continue to prove that play-based programs for children have the biggest impacts on the education and long-term life outcomes of children living in poverty.

This is where Playground Ideas comes in. From Guatemala to Kenya to Azerbaijan, Playground Ideas is a do-it-yourself library that is helping communities around the world to do this very thing, through an innovative model that brings the inspired creativity of communities together with materials locally-sourced, often re-cycled materials. In Papua New Guinea, for example, old car parts planted in the soil become a play space. A cracked water tank in Uganda becomes a play hut (Playground Ideas 2017a). The idea is brilliant in its simplicity: assemble easy-to-follow ideas for building play spaces out of readily available components, then make these ideas available to others who can then build their own (Playground Ideas 2017b).

Local leaders can gain inspiration and support from the Playground Ideas website. A Nairobi social studies teacher promoted hut building on his school campus. Inspired by the different cultural styles of homes across the country, 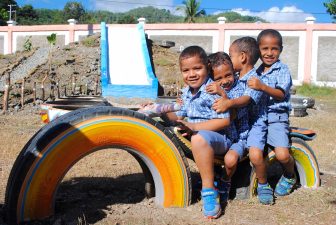 children assembled these huts from sticks, grass and stones. Playground Ideas similarly inspired Ansaris Garcia Cabezas to support playground development in her home in Guatemala. With no training except from Playground Ideas, she has worked with children and communities to design and build new playgrounds. “What I’m proud of is the people,” she says, “it’s the people, the power of people who do things together” (Playground Ideas, 2017a).

Playground Ideas began in 2007. Soon after its establishment, the non-profit recognised that an open-source sharing of ideas, time, and resources could support a global network that would give more children access to play. The idea has literally spread across the globe, with more than 1455 projects in 85 countries, reaching many schools and communities where children otherwise would not have access to play. Support services include how-to handbooks, do-it-yourself design books, crowdsourcing for fundraising, occasional Skype calls, and a research report on the significance of play (Playground Ideas 2017b).

The Case for Play

The Case for Play (Kellock, 2015) identifies long term economic, health, social, and cognitive benefits of play for children, particularly for children living in poverty. The report is rich with simple info-graphics that demonstrate the value of play across a range of measures. Kellock (2015) asserts that in many parts of the Global South, access to education is often at the expense of access to play. He elaborates, that ‘less consideration is given to the quality of environment students experience once they are in school. Schools without playgrounds are more common than not and funding is narrowly directed towards literacy and numeracy’. This disconnect between what we know about the integral role of play in children’s learning and development and how the education system responds to it, he suggests, represents a ‘profound misunderstanding of how children learn’ (Kellock 2015: 9). Playground Ideas helps to bridge this gap, bringing play and learning together again.

The Case for Play by Peter Kellock (Playground Ideas, 2015), can be accessed here