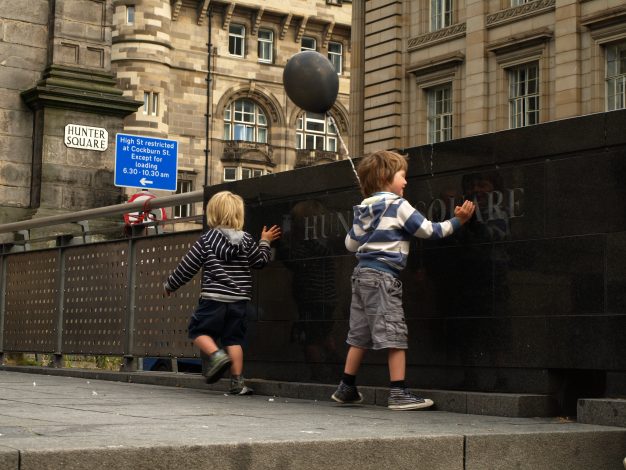 The motion (paraphrased) said that:

‘Parliament welcomes the promotion of Scotland’s first inclusive Play Charter by Play Scotland … understands that the charter describes a collective commitment to play for all babies, children and young people in Scotland, in line with the right of children to play as set in out in Article 31 of the UN Convention on the Rights of the Child (UNCRC).

‘(Parliament) further understands that the charter builds on the Scottish Government’s National Play Strategy … notes the charter’s aims of highlighting that every child has the right to play … ensuring that a commitment to play is more strongly embedded within policies, strategies, key qualifications and … training, ensuring that children and young people are supported in their right to play and that play spaces are valued within communities…’

The motion also encouraged all SMPs to become ‘Play Champions’ by pledging their support to the charter.

‘Not built to sit still’

The debate included a contribution from Conservative SMP Brian Whittle, who said:

“Children are not built to sit still … that brings us to the importance of active play—especially in the early years. As I have said before, youngsters want to move about a lot with their peers. In doing so, they set patterns for life and learn interaction skills, confidence, resilience, self-awareness and awareness of others—all behaviours that are much more difficult to learn sitting still in a nursery or classroom …

“We have not got that right yet. We need to consider how we give every child the opportunity for outdoor and indoor play: climbing, jumping—in puddles, if necessary—falling down, getting back up, catching, throwing and all the other ways that they can invent to learn in their own ways. That is the blueprint for life. That is how we tackle preventable ill health and stack the cards in our favour.

“That all starts with access to active play, and with the premise that it is every child’s right to play with their friends, get dirty, be noisy and be sociable, irrespective of background or personal circumstances—all the things that we took for granted when we were kids. In my view, that is the basis of solving many of the problems that we see in our society today”.

Labour’s Daniel Johnson said that, although the play strategy is right:

“We also need to set out the challenges. One in six children in Scotland does not have access to outdoor space, 85 per cent of children in Scotland say that they do not spend enough time engaged in free play, and more than 1,000 Scottish schools have no access to outdoor facilities … we need talk about local services and the impact of local funding.

“We must have some innovation. Schemes such as playing out will come at little cost to local government. We should consider whether we should be opening our schools during summer holidays in order to enable play and to address issues of childcare in the holidays. We also need to talk about local services. If we are to have accessible and stimulating parks in which our children can play, that requires investment in local services”.

“The Government continues to invest in play and, this year alone, we have invested more than £3 million in it. That includes funding of £700,000 for Play, Talk, Read, £1.6 million for the book-bug programme and £260,000 for Play Scotland, plus a host of other fantastic initiatives.

“Since 2012, we have invested more than £3 million in Inspiring Scotland’s go2play play ranger fund. The fund supports Scottish charities to develop play ranger provision for vulnerable children and disadvantaged groups and to engage them in active outdoor play. Play rangers provide a huge number of benefits not only for our children but for parents and communities, by enabling children to play in spaces that are familiar to them, such as their street or local park, while giving parents peace of mind and encouraging positive interaction between children and the wider community”.

The minister thanked Play Scotland and the play strategy implementation group for working with the government “to create and enhance the fundamental building blocks that will enable and inform a more playful Scotland in which children can realise their right to play every day” He welcomed the play charter, saying “it will help us to further embed the principles of the play strategy, and … encourage us to commit to play as an essential ingredient of children’s wellbeing”.