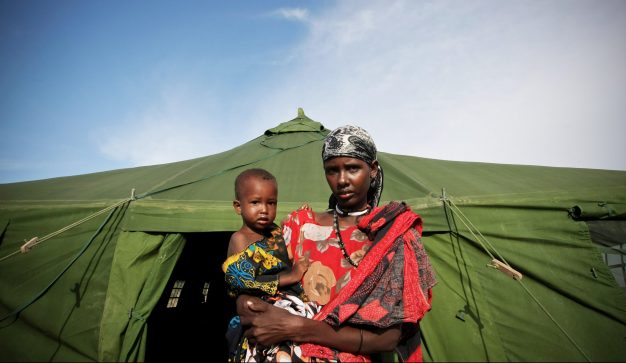 Children, as always, are among the most at risk, as Africa faces the world’s worst humanitarian disaster for more than seventy years, reports Adrian Voce.

The United Nations has declared that the world is facing its largest humanitarian crisis since the end of the second world war and called for a major campaign to avoid “a catastrophe”. The UN’s head of humanitarian aid, Stephen O’Brien said that more than 20 million people faced the threat of starvation and in famine in Yemen, Somalia, South Sudan and Nigeria.

Children are among the worst affected, with UNICEF having already warned that 1.4m are at risk of starvation in 2017 unless the unfolding disaster is averted.

Mr O’Brien said $4.4bn (£3.6bn) was needed by July to prevent catastrophe on an unprecedented scale in modern times.

“We stand at a critical point in history,” he told the UN Security Council on Friday. “Already at the beginning of the year we are facing the largest humanitarian crisis since the creation of the United Nations. Now, more than 20 million people across four countries face starvation and famine. Without collective and coordinated global efforts, people will simply starve to death. Many more will suffer and die from disease.

“Hope will be lost”

“Children stunted and out of school. Livelihoods, futures and hope will be lost. Communities’ resilience rapidly wilting away. Development gains reversed. Many will be displaced and will continue to move in search for survival, creating ever more instability across entire regions.”

Mr O’Brien’s comments follow on from a similar appeal made by UN Secretary General Antonio Guterres last month. At that time, he revealed the UN had only received $90m (£74m) so far in 2017, despite generous pledges.

In February, the European Commission announced an emergency aid package worth €82 million for South Sudan, as famine was declared in declared in the country for the first time since it gained independence in 2011. The EU estimates that one hundred thousand people are facing starvation in parts of the country while 40 per cent of the population (4.9 million people) is in need of urgent humanitarian assistance.