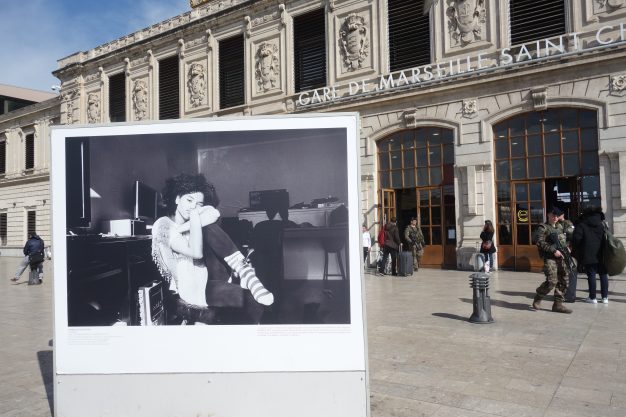 A public exhibition of large-scale photographs spread across five major railway stations aims to convey the hidden essence of the young people of France. Darijana Hahn reviews the results.

In October 2016 several photographers were chosen for the task of discovering and portraying the essence of French youth. The outcome is 15 large portraits, now on display, in an ‘avant-premiere’, at five big French railway stations

A young man on a bridge looks a little bit frightening. Leaning on a railing, with his sunglasses, his ‘hoodie’ top and his cigarettes, he has the look of someone comfortable that there is crime in the air. But this is just a role. He is playing the part of the Dark Captain from the web series GEEKS2. In real-life 19-year old Florentin is a student in the hotel business. In front of his portrait stands a man who takes another photo of him before entering the train station in Marseille.

How do young people see themselves?

The project was launched by the Ministry of Culture and Communication, where the minister, Audrey Azonlay, believes these 15 portraits reveal some of the mystery that youth is generally wrapped up in. She thinks the exhibition asks the questions: how do young people see themselves, and how are they seen by society? 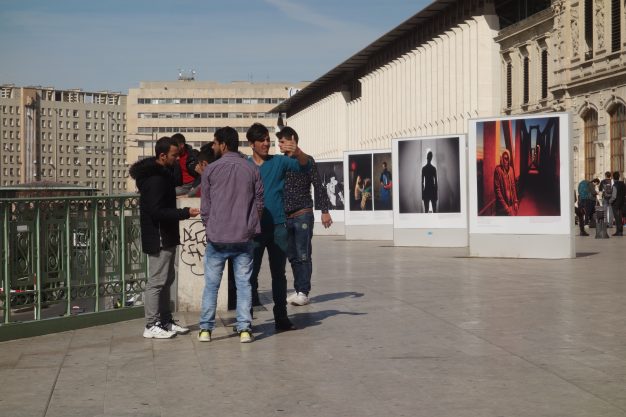 To capture the diversity of the subjects, the protagonists are portrayed in such different settings as a school, the countryside, a nightclub, the stage, at work and in prison. One of the images portrays the contours of a young man standing in a shower cabinet. From the photograph itself, It is not obvious who is portrayed, or where. Only in the caption does it become clear that the young man is a prisoner: an inmate, in fact, of the biggest prison in Europe, Fleury-Mérogis. How old he is, and how many other young people are imprisoned there, are questions that remain unanswered.

Next to the young nameless prisoner in the shower, is a portrait of Maxime. The 21-year old man is standing very proudly there in his blue apron and his red glove. Honoured as the best apprentice fishmonger in France, in contrast to the popular assumption that all young people yearn for the big city, Maxine wants to stay in the small town of Pont l’Abbé in the Bretagne.

Equally smart is Julie. This 18-year old woman is portrayed in the manner of a Dutch still life: standing in front of a dark background with shiny apples on the table next to her. Julie is equally determined to stay in a small town, Plomeur, where she can have space for her many animals, including her two ponies.

Less well orientated seems Florinda, who is pictured lazily reclining on a chair at a computer desk. She is portrayed by the photographer Gabriella Duphantier, who took photographs of pupils at a primary school between 2005 and 2012. Four years later she came back to see what had become of her subjects. Her observation that, in this period of life, the mid-to-late teens, they are in a kind of limbo – neither children nor adults, but half and half – is one that could be made of youth in general.

Often discriminated against by the rest of society because they don’t seem to fit in any clear pattern, this French exhibition shines a new light on young people and will help to bring to the Youth of France some of the more positive attention they deserve.