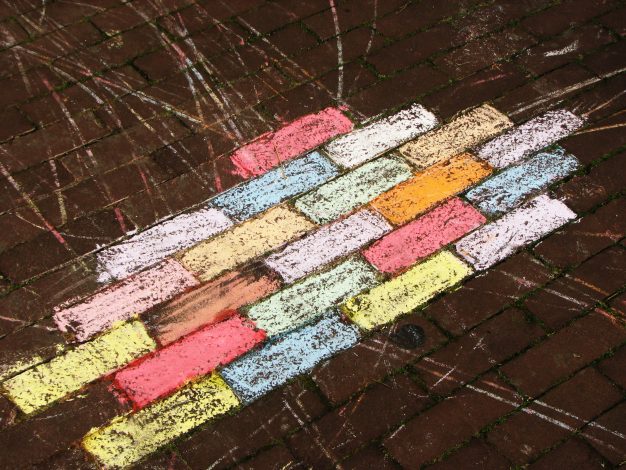 In these edited extracts from their new case study of the Dutch approach to playable urban design, the Scottish community architects, City for Play, explore how public investment in cycling and playgrounds, along with innovative residential street designs, have helped to make the Netherlands one of the most child friendly countries in the world.

If we accept that there is more to life than existence, work and everyday functioning, then we are open to the possibility that the well-functioning city must be at once ‘play-full’ and playful: ‘play-full’ in the sense that it provides an array of opportunities and opportunities (to play) for all; and ‘playful’ in the sense that its public spaces are inviting, challenging and creatively engaging.

Play-full and Playful Cities: The Infrastructure of Play in the Netherlands is a pilot study exploring select elements of a ‘Playful(l) Cities Manifesto’. The study aimed to understand the Netherlands’ renowned bicycle infrastructure: how it emerged, how it alters the way in which people use the city, and how it affects the lives of children and their experience of the city; (and how it) allowed us to explore the city’s vast array of playgrounds and playable space in the hope that we might define a range of typologies to better communicate how play can be integrated into a city.

Our study took in the experience of the Dutch cities, Delft and Amsterdam and will represent one of a series that explore and document ‘play provision’ and ‘attitudes towards play’ in an international context, with a view to understanding and exemplifying the “Playful (l) City”…

Birth of the woonerf

… In the 1970’s, Delft was the birthplace of the ‘Woonerf’; (a type of) street now described as a ‘home zone’ in the UK, where pedestrians take priority over motorised traffic; and public spaces can be adopted by the residents: restricting, if not blocking traffic to allow kids to play. 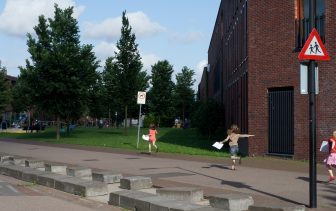 In creating a shared space that maximizes the safety and comfort of human use, the woonerf was a novel and effective way to activate and reclaim vital public space. The success of these spaces meant that they became commonplace across the country – forming part of a widespread, yet dense, network of cycle-able and walk-able routes – and setting an example internationally of sustainable ‘human scale’ design.

The Netherlands, particularly Amsterdam, is also famed for its play areas. Before the appearance of the first Woonerf, the architect Aldo van Eyck had designed hundreds of playgrounds in a spatial experiment that positively marked the childhood of an entire generation and, through his legacy, generations thereafter. Of his 736 playgrounds, only 90 still exist. However the city still has a large play presence and some impressive playgrounds, such as ‘Carve’s Potgeiterstraat’, which draws influence from Eyck and the Woonerf.

Our ‘Mobycon’ tour guide in Delft explained that through their Social Democratic Welfare State model, residents pay an increased rate of tax but benefit through a greater quality of life as sensible investments are made in such things as their impressive cycle network and the quality and quantity of their public space and play areas, particularly in low income neighbourhoods. In fact, the Dutch spend £24 per person per year on cycling, while in the UK the figure invested outside London is just £1.39 per person. This figure is easily justified with a total of 27% of all journeys being made by bike in the Netherlands – 60% in Amsterdam centre – whereas in the UK that figures sits at just 2%. (Sky News, Mar 20

… A child friendly city, in the context of life between buildings, is one that encourages (children’s) active and passive engagement with the built environment, local culture, community and heritage. The physical design of a city dictates this in its affordance of children’s innate desire to play, explore and discover. When you consider this, you might say that it comes down to ‘motivations’ and ‘deterrents’: the ‘pros and ‘cons’ of going out to play, if you like.

In some cases, motivation is easy to achieve because “play is a process that is freely chosen, personally directed and intrinsically motivated”. However the problem arises when the inconvenience outweighs the appeal. In this case many would settle for an arbitrary alternative within the domestic realm. However, the infrastructures for cycling make opportunities for play more accessible and convenient, tipping this balance in favour of the more rewarding public realm.

The City of Play is an award winning architectural social enterprise who help communities create inclusive and engaging ‘places of play’ all across Scotland.