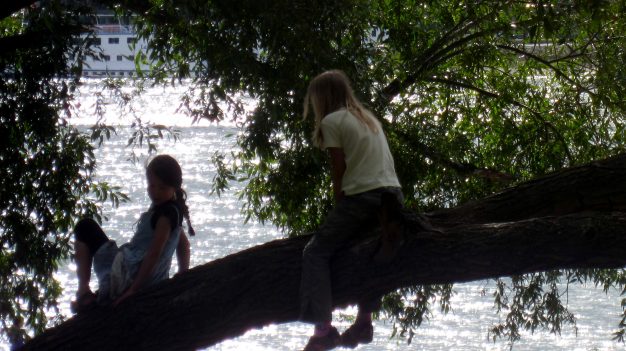 Why do German children play out more than British?

In this article, the German-based, British researcher, Ellen Weaver highlights the marked differences in the degree of freedom – to play outside and to travel independently – afforded to British children compared to their German counterparts. She suggests the reasons for this need more research, and sets out an approach that she hopes will eventually attract the necessary funding.

There is now extensive research evidence that children’s freedom, mobility and risky, outdoor play in the UK have reduced severely and detrimentally in recent years. In contrast, it is common to see young children out and about on German streets without adults accompanying them, just as was normal in Britain and Ireland a generation or 2 ago.

No study has yet identified why children’s outdoor play has diminished markedly more in the UK than in some other European countries. Research is proposed which will be the first investigation into the impact of apprehension of crime, safety concerns and other socio-legal factors on children’s play opportunities in the UK in comparison with Germany.

The project is planned in collaboration with David Ball, Professor of Risk Management at Middlesex University, who is a member of the UK Play Safety Forum, and Baldo Blinkert, Emeritus professor of Sociology at Freiburg University, whose research led to the design of pioneering, then state-of-the-art housing development in Vauban, Freiburg in the 1980s, which is still regarded as a model of child friendly urban design.

Baldo and colleagues recently conducted a study of children’s play (Raum Für Kinderspiel, Space for Children to Play) in which they collected detailed data on over 5000 children aged 5 – 9 (inclusive) in 5 medium sized towns in Baden Württemberg. The researchers saw autonomy as essential to child development, hence their emphasis on unsupervised play. They quoted Renz Polster as follows:

“One can learn Pythagoras’ theorem or to play the violin later in life. What cannot be established later are fundamental life skills, such as self-confidence, getting on with others and resilience: These are things that can’t be taught. They are things, which children develop through play. … .. Play is the business objective of childhood. Up until puberty children instinctively do purposeless stuff and play to their limits,… Our aim must be to support children in building up their fundamental life skills.”

The study found that the quality of residential environments, as well as parental attitudes towards learning and safety, were the key factors in enabling or restricting children’s unsupervised outdoor play: Children living in socio-economically deprived neighbourhoods had significantly less opportunity to play outside independently of adults than children living in areas with child-friendly urban design: ‘Street childhood’ had become an indicator of wealth rather than poverty.

Furthermore, they found that the children who most engaged in after-school activities (sport clubs, music lessons, etc.) were also the children who played most outside without adult supervision. Rather than being prevented from free play by their extra-curricular schedules, these children lived predominantly in areas where outdoor play was considered safe and in families where time for unstructured play was seen as valuable and worthwhile.

In order to obtain initial evidence on whether there is a difference between the UK and Germany, David Ball, Baldo Blinkert and I have conducted an unfunded preliminary study replicating a small section of the Raum für Kinderspiel study, for comparison. With the invaluable help of the four UK national play agencies we asked UK parents some of the same questions that the German study had asked. Replies were entirely online, and were self-selecting, so were not a cross section of population. We received 432 online survey responses, 79% of which were from Scotland.

Using the same assessment criteria on the child-friendliness of residential neighbourhoods used for the German study, this preliminary survey found that residential areas in which the UK respondents lived were generally better for children’s outdoor play than those in the German study, but that, nevertheless, the UK children played outside significantly less than their German counterparts. Specifically: overall the comparison showed that German children played outside without supervision on average 67 minutes a day (on school, weekdays, in moderate weather), while the equivalent UK (primarily Scottish) figure was 36 minutes; five year olds living in the areas least suited to outdoor play are outside without adult supervision on average four and a half times longer in Germany than in the UK sample; and nine year olds living in medium quality environments play outside without supervision more than twice as much in Germany compared to the UK sample.

The German study asked parents a hypothetical question on safety and children’s play, regardless of their particular neighbourhood or their child’s age. The same question was asked of the parents in the UK survey, for comparison. This showed UK parents’ to be two-and-a-half times more cautious or risk averse than the German parents.

These preliminary findings indicate that there are significant differences warranting further research. In collaboration with the four UK play agencies we have devised a detailed UK wide methodology by which to investigate why opportunities for unsupervised play have become far more restricted here than they are in Germany, with particular reference to the impact of apprehension and misapprehension on crime and law in impairing or enabling free play. Obtaining funding for this work is proving difficult, but we intend to persist and we would welcome all suggestions or recommendations for sources of financial support, since we are convinced that the findings will contribute towards enabling greater free play in the UK and Ireland.

2 comments op “Why do German children play out more than British?”

Very interesting article and research. Can I just clarify the author’s name (Weaving or Weaver?!) and which University she is based at, as I’d like to find out more about her work but can’t find anything on Google searches. Thanks!

It’s Ellen Weaver, thanks for pointing out the error! We will let her know of your interest.