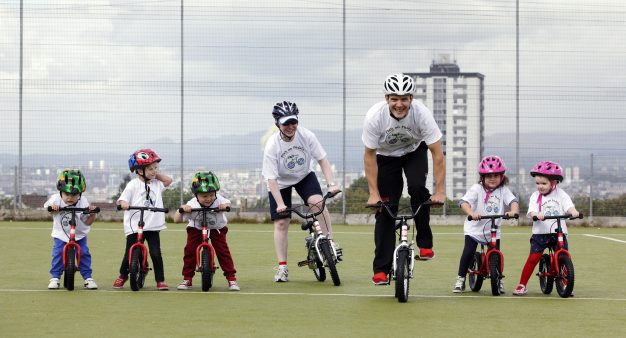 Play on Pedals, a national partnership project in Scotland that aimed to give every preschool child in Glasgow, the country’s largest city, the opportunity to learn to ride a bike before starting school, has published its report.

Play on Pedals was a funded partnership project running from April 2014 until December 2016. The project was supported by players of People’s Postcode Lottery and awarded £231,000 by the People’s Postcode Trust’s Dream Fund, the largest single award given by the fund at that time.

The project is a partnership between Cycling UK, Cycling Scotland, The Glasgow Bike Station and Play Scotland. It was the first of its kind in the UK, offering city-wide provision to preschool children and their families. Play on Pedals was designed as a sustainable project to break down the barriers young people face to participating in physical activity in the city and support children and families to enjoy and gain con dence through cycling.

Glasgow is a city with large areas of multiple deprivation and recognised health inequalities. With low life expectancy levels in comparison to other UK cities and poor physical activity levels in adults and children, addressing these barriers remains integral to a healthier and happier future generation.

Play on Pedals partners recognised how cycling can provide a means of independence, an opportunity to develop new skills and a low cost way to maintain a healthy lifestyle. It has both physical and mental health bene ts, is sustainable, inclusive and fun; by engaging children and young families in cycling, Play on Pedals aimed to have a transformational e ect on future generations in Glasgow.

Play on Pedals partners recognised how cycling can provide a means of independence, an opportunity to develop new skills and low cost way to maintain a healthy lifestyle. It has both physical and mental health benefits, is sustainable, inclusive and fun; by engaging children and young families in cycling, Play on Pedals aimed to have a transformational effect on future generations in Glasgow.

Working with local ‘hero organisations’, receiving small grants, Play on Pedals provided free training for people working in the early years as well as volunteers to become trained as instructors, instructor trainers and in basic bike maintenance. The project organised city-wide secondhand bike donations and facilitated the distribution of both these and a 500-strong fleet of bikes and resources to those who cannot access them. Regular community drop-in events for families were held across the city to provide free and fun activities and space for learning to cycle.

From 2014-2016 Play on Pedals engaged 7,148 preschool children and trained 388 adults, as well as distributing 550 balance and pedal bikes across city. There were 52 Instructor training day and 240 community events in and around Glasgow.

In summer 2016, the project received additional funding from Glasgow City Council through the Paths for All ‘Smarter Choices, Smarter Places’ funding stream, to work alongside Glasgow Bike Station, South West Community Cycles, Free Wheel North and Soul Riders as the new Glasgow Community Cycle Network. This enabled Play on Pedals to continue to offer community events and training into 2017, after the end of the People’s Postcode Lottery funding.

Cycling Scotland has also been funded by Transport Scotland to roll out the training programme to local authorities across Scotland, working with 23 different authorities in the first  year of this additional funding. The partnership hopes to be able to offer both the training and community events and engagement to all local authorities across Scotland, enabling all preschool children to access cycling before starting school.