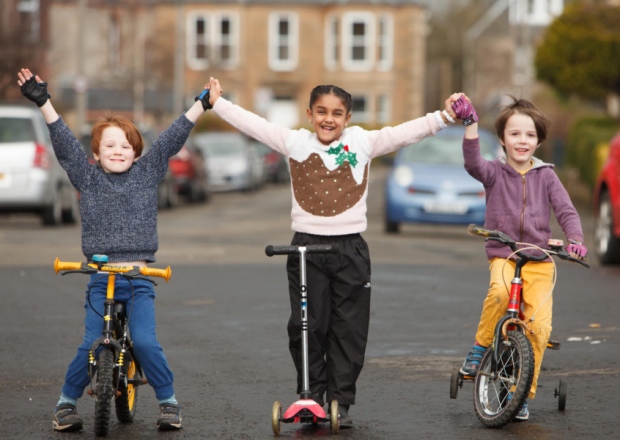 Edinburgh street play pilot to be extended despite criticism

Despite problems with the pilot scheme, Edinburgh’s Playing Out Streets scheme is to be extended, reports Florence Snead of the Edinburgh Evening News.

A street play scheme in the Scottish capital, Edinburgh, is to be extended amid criticism the initial pilot was a “mess” and difficult to use. The city council admitted that there were so few inquiries about its ‘Edinburgh Playing Out Streets’ pilot that not  one street in the Capital ended up being closed for play last year.

There are now calls for the scheme to be improved after parents claimed they found the scheme too troublesome to use. Dad-of-two Thomas Lynch, from Drumbrae, knew about last year’s pilot through his involvement in residents’ group Edinburgh Playing Out and said he was “disappointed” with how it went. The 43-year-old said he wasn’t convinced many knew it was happening and said many of those who applied never heard back from the council. He said: “It’s a really simple thing to play on a bit of street or a bit of road.

“From the people we have spoken to who tried to use the pilot they have needed to chase people up from the council and try to pin people down. I think people gave up because of the lack of communication.” Mr Lynch said he had closed a street for play prior to the pilot’s launch but steered clear of the council initiative because he “could tell it was a process that wasn’t going to be easy”. He added: “It needs to be a streamlined, one point of contact for people. From a parenting point of view I want to go to one person within the council and speak to that person and for them to make the decision and say ‘go ahead’. “I’d say that’s the best – or a very simple online form which can be completed and has very clear timescales as to when they’ll hear back.”

The pilot came just months after Edinburgh Playing Out successfully lobbied the council to cut the expense surrounding local street closures, amid claims it could cost up to £1500. Fellow group member and mum-of-two Louise Drumm, 44, said it was good the council wasn’t giving up, but agreed the process of closing streets needed to be simplified. She said: “It wasn’t clear who to contact and how many closures you could apply for.  I know people from other  roads applied and heard nothing back. “It needs to be clear who to contact, what the process is and what the responsibilities of the applicant are. “We would encourage people to apply for it if the pilot  goes ahead and to contact us as well if they want help about that. “We want to see how it works and hopefully moving forward it will be a simpler process.”

The extended pilot will run from mid-April to mid-August after which a report on its outcome will be presented to the city council’s transport and environment committee in January 2018.