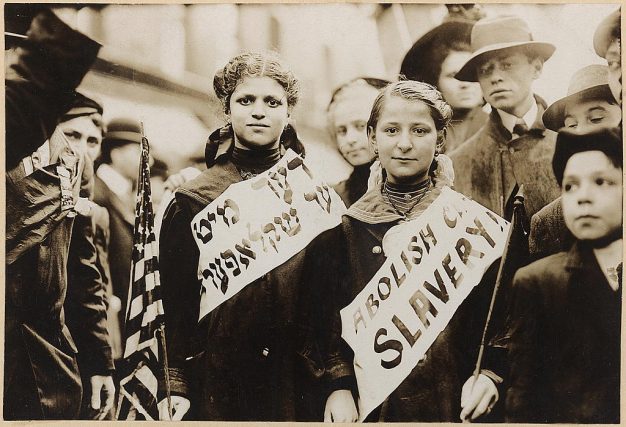 Children and the city: how industrialisation shaped modern childhood

In this first part of a two-part essay, the Greek writer and academic Eleni Kapa-Karasavidou reflects on how the industrial revolution both created the conditions of children in towns and cities, and also shaped our modern constructs of childhood.

In recent decades, as the social and financial crisis of ‘post-democracy’ deepens, there is a growing interest in the phenomenon of child poverty in the towns and cities of the world. Additionally, with the refugee crisis ‘on the top of everyone’s social agenda’, there is increasing concern about the plight, in particular, of refugee children.

With conflicts of many kinds a constant reality in our world, it is women and children who the bear the brunt of financial and actual violence; and it is active citizens, academic communities, activists, local and international societies and institutions who must feel the urge to respond; to improve society and its values. In this context, the image of poor or refugee children has been used as a tool to sake society’s conscience, and thus as a means to stimulate social change.

Such concern is not an entirely new phenomenon. In fact, humanitarian academics and artists have perennially ‘used’ children to highlight and denounce social ills and make us more sensitive towards injustice, throughout modern history. The passage from a collective feudal economy to an industrial and then to a technological one brought about many more changes than simply to the means of production. Most significantly, it carried a subversion of the distinctive features of the modern world; and basic among these was the notion of children and childhood.

Looking at the post-industrial centuries, we can see that society constructed childhood as an embodiment its hopes and fears, so that children have collectively been the subject of investment – moral and financial – but also reflected our responsibilities, delusions and struggles; as well as our dreams and aspirations. ‘It is one of the puzzles of our history’, argues Somerville (1982) ‘that the greatest exploitation of children coincided with the greatest glorification of childhood’.

As a period of blistering political, social and religious upheavals, from the 17th through to the 20th century, industrialisation and its attendant social revolutions can be see as the catalyst for the most exciting changes in western history, including the way we perceive childhood. As populations increasingly flocked to the cities, social conditions could no longer remain hidden from view in isolated rural landscapes. Common abuses and privations became more visible. Chief among these were those endured by children, who were increasingly the ‘primary victims’ (Cunningham, 1991) of industrialisation’s rapacious need for cheap labour. The attendant discourse about children at work raised fundamental issues about the nature of childhood.

Children had worked before (Cunningham 1991, also Somerville, 1982, p. 161), but not in the way demanded by the production line. Now, increasingly urban environments and their randomly gathered populations was to reveal like never before society’s disparate nature and hierarchical social structure. The mass demographic changes gave birth to related phenomena of inequality, discrimination and injustice; and the failure of society to ensure the built environment kept pace with the massive social changes meant a new underclass was formed, whereby outcasts were forced to live in slums, or even on the streets (Hall, 1988). Those finding themselves in such circumstances were then roundly blamed for their own conditions. In this way the poorest in society were demonised; their children no longer the innocent primitives of the Romantic vision but ‘seen as a danger, as “savages”, who might subvert the stability of mid-Victorian civilisation’ (Cunningham, 1991)

Photo: US Library of Congress. (Probably taken during May 1, 1909 Labor Parade in New York City).