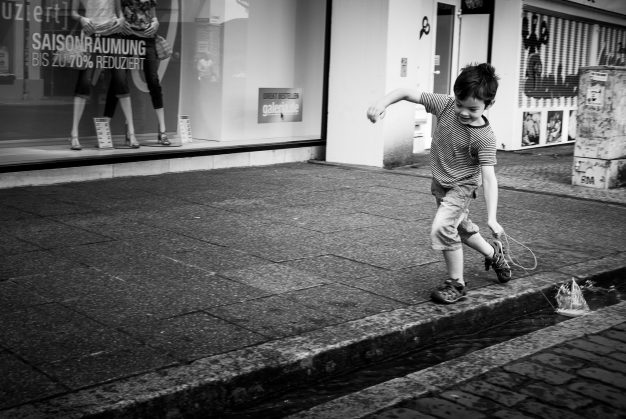 Why do German children have more freedom to play?

A comparative study of outdoor play in Germany and the UK has found striking differences in the levels of freedom to play allowed to children in the different countries. It concludes that more extensive research is needed into the factors that give rise to such a contrast.

A recent German study of children’s play, in five towns in Baden Württemberg (Blinkert et al, 2014), emphasised outdoor, unsupervised play as essential for children to develop personal and social autonomy, such that inequality in access to free play opportunities is a form of social injustice.

The research collected detailed data on over 5000 children aged 5 – 9 (inclusive) and identified factors in each residential area studied (traffic volume, speed, play space proximity etc.) to categorise the quality of neighbourhoods for the purposes of children’s outdoor play.

The study found that the quality of residential environments, as well as parental attitudes towards learning and safety, were the key factors in enabling or restricting children’s unsupervised outdoor play. Children living in socio-economically deprived neighbourhoods had significantly less opportunity to play outside independently of adults compared to children living in areas with child-friendly urban designs. Thus, in contrast to previous eras, it could be said that ‘street childhood’ has now become an indicator of relative wealth rather than poverty,

Furthermore, the children most engaged in after-school activities (sports clubs, music lessons, etc.) were also the children who played outside most without adult supervision. Rather than being prevented from free play by their extra-curricular schedules, these children lived predominantly in areas where outdoor play was considered safe, and in families where time for unstructured play was seen as valuable and worthwhile.

In the UK, a preliminary study was conducted in Autumn 2015, designed for comparison with this German data. This found that residential areas in the UK were generally better for children’s outdoor play than in Germany, but that, nevertheless, German children played outside significantly more than their UK counterparts. Overall, the comparison showed that German children played outside without supervision, on average, 67 minutes per day (on school, weekdays and in moderate weather), while the equivalent UK (primarily Scottish) figure was 36 minutes.

The study found that five year-olds living in the areas least suited to outdoor play were outside without adult supervision, on average, four and a half times longer in Germany than in the UK. In addition, nine year-olds living in medium quality environments played outside without supervision, on average, more than twice as much in Germany compared to the UK.

This initial survey also indicates that UK parents are strikingly more risk-averse than their German counterparts. When asked the same specific hypothetical question concerning their view on a child wanting to play in a stream, UK parents’ responses were 2.5 times more cautious than the German parents’ responses.

This study gives rise to the need for further investigation into why children’s opportunities for unsupervised outdoor play have evidently become far more restricted in the UK than in Germany, with particular reference to the impact of apprehension and misapprehension on levels of crime in impairing or enabling free play.

Ellen Weaver
Freiburger Institut für angewandte Sozialwissenschaft (FIFAS), Germany
(adapted from her presentation to the Child in the City conference, 2016)