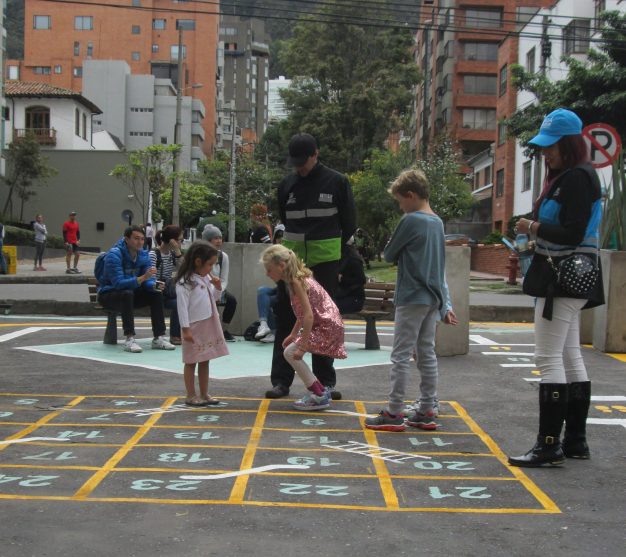 This year, the city of Bogotá will be transforming some of its parking spots into public spaces – and places for play. Former Mayor Enrique Peñalosa, known worldwide for his establishment of Bogotá’s ciclovía, was re-elected to a new term in 2016, 14 years after his previous time in office. In his new term, Peñalosa seeks to increase access to nature with bike routes along the river and public spaces in the city.

When he was Mayor previously, Peñalosa suggested that “children are a kind of indicator species. If we can build a successful city for children, we will have a successful city for all people” (Peñalosa and Ives 2004). In his previous administration, Peñalosa addressed this through a series of transportation initiatives. This time around, he will launch projects to transform public space, part of a larger movement to “take back the streets” in cities throughout the world.

The first of such public space projects was launched on October 15, 2016 at the intersection of Calle 80 and Carrera 9, in one the more affluent neighborhoods in the north of Bogotá. The space will be developed with a series of small interventions. Prior to the 15th, a trial intervention used sidewalk chalk and moveable furniture to temporarily transform the pavement. In this treatment, a chalk mural comprised of roses and the expression “Hagamos que Florezca la Ciudad” (let the city flourish) dominated the square. 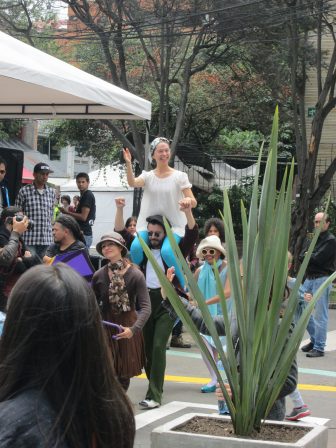 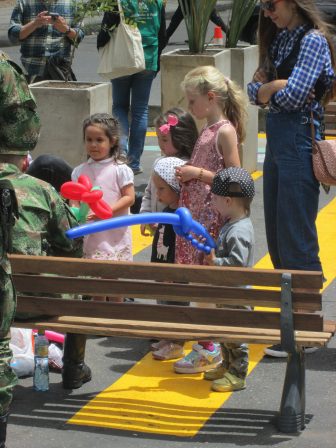 In the second intervention, prepared for the opening on the 15th, the space was organized by a series of geometric play spaces, including hopscotch and chutes and ladders jumping games. Plants and benches helped to create a family-friendly space, for mothers with strollers, men out walking their dogs, and children on scooters and in-line skates. At the opening, performers sang, danced and encouraged play; policemen made balloon art for children; and families enjoyed music and free refreshments.

Long term plans for the space include a partnership with a café vendor, who will maintain the space in lieu of rent, and continued experimentation with the most effective design of the park space. This is the first of a series of spaces throughout the city that Peñalosa’s administration plans to transform over the next several months. As Colombia seeks to establish a peace agreement after decades of war, many citizens are eager for such projects that mark the country’s transformation, with public spaces serving an important role – as places to gather, hold events, and celebrate a new direction.

Peñalosa, Enrique and Susan Ives. 2004. “The Politics of Happiness.”  YES! Magazine.  May 20, 2004.  http://www.yesmagazine.org/issues/finding-courage/the-politics-of-happiness