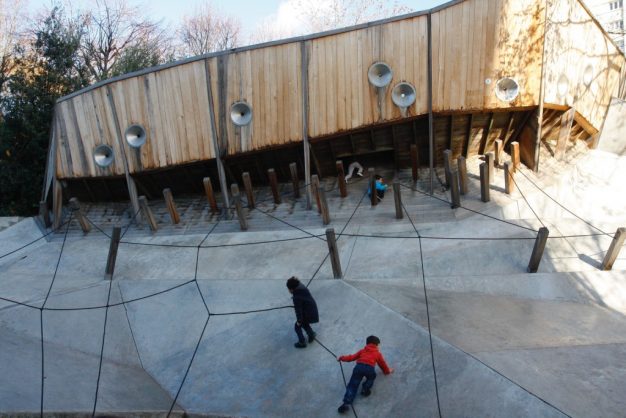 How to engage kids and community in playground design

How can we learn what children and adults want and need in playgrounds? And how can we make sure that those playgrounds are a vital public space?

These questions were front and center when I participated in a recent review for students in a graduate program for landscape architects.  The focus of the course was how to create playgrounds that would stimulate creative, harmonious, healthy urban living.

One of my fellow jurors chastised (rightfully) these young designers for failing to diligently observe how local folks – young and old- used the designated spaces during the course of the day.  How did participants and their activities change as the day progressed?  Who interacted with whom? What did they DO?

Those who read this column regularly know that I have no confidence in asking children ” what they want” inserted into their play space.  The results tend to be shallow and simplistic.  Noted psychologist Roger Hart has long maintained that kids will just “spit back” what they have seen elsewhere. Adults don’t fare any better.  In my November column I wrote about the Superkilen in Copenhagen and how the designers may have settled for too little information when they installed objects in the  from the homelands of immigrants who live in the housing nearby.

Perhaps we need guidelines, suggestions about the best questions to ask in order to gather the most significant information.  Surely there has to be stringent observation of what participants do, but there can be more. Taking a cue from Hart, I have some recommendations to make as to how to consider addressing kids or adults.  Here are some possible ” ice breakers” with each group, although I am sure you can come up with many more.

Where did you play as a child? As a teen?
Tell me about the neighborhood where you grew up.
What crazy things did you do when you were young?
Where do you spend free time now?
What is the best activity you and your kids share?
Do you have a favorite private space?
What value or sensation do you want your kids to experience: e.g.  risk, fear, failure, satisfaction, accomplishment, beauty, tranquility, action?

Asking the question is just half of this exercise.  What do you do with this data?  This is where the planner/designer has to think broadly.  For example, if a child says that climbing trees is scary and prohibited but he would like to continue to do it, then perhaps you have to think about access to high, dangerous looking (but not necessarily inappropriate) places where it is not known if every kid can get to the top on the first try. Another example would be to respond to a child who likes to talk with a few friends.  Think about how to create small intimate, even hidden spaces to support that kind of friendship and interaction. 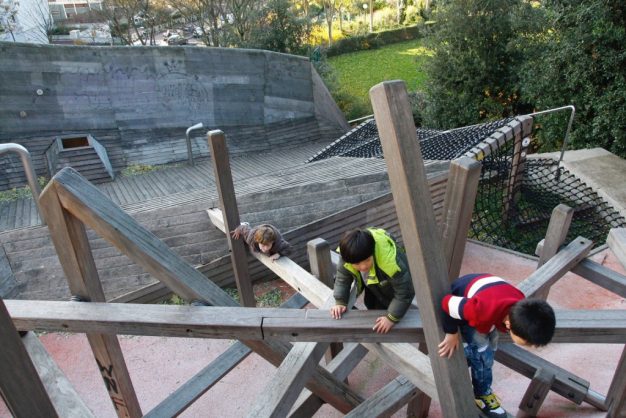 There are already three remarkable projects that illustrate how different processes could work. In Paris, the city wanted to rip out a deteriorating multi level playground that nestled into a hillside.  In preparation to choosing a design team, the city hired a facilitator CODEJ (le Comité pour la Développement d’Espaces pour le Jeu) to conduct surveys and workshops with the parents.  The most critical phase was asking the adults (most of whom were recent émigrés to France) to rank intentions they hoped to see in the final product. They had to access values such as risk taking; imaginative play; being safe. They overwhelming chose risk taking, a concept they felt they had experienced as young people but was not necessarily available on French playgrounds.  The ingenious part is that CODEJ asked several teams of landscape architects to come up with a similar set of evaluations.  It was a no brainer to choose BASE landscape architects when they designated risk taking as their primary goal.

The finished piece, in Parc Belleville, displays the best type of healthy risk: open ended play where children have lots of choices and never know exactly how things will end.  There are several levels, including the folded concrete base on which kids can hoist themselves; the wood section that is filled with lots of odd angles and challenging surfaces; and a large orange tower for which the children also have to figure out how to make their way up and through it. 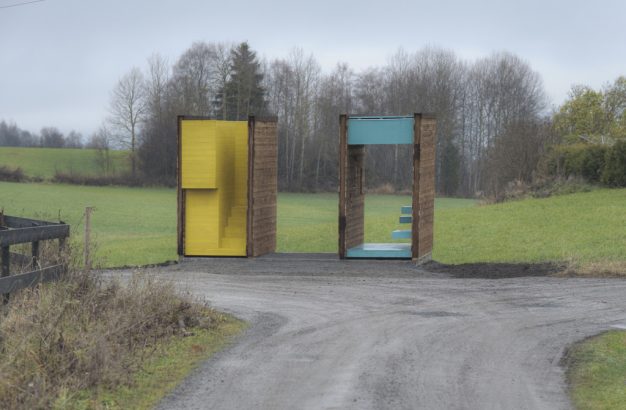 In Norway, the firm TYIN  Tegnestue Architects has come up with their own strategies.  Working in a poor area of Bangkok, they asked the children describe and draw their homes.  From the intense sunlight the children repeatedly drew, the architects learned that shade was an appreciated luxury and would be a meaningful addition to their design. The architects also asked the children to bring in a single item from their homes and to talk about it.  They were particularly taken by the glass that one child brought; it lead to discussion about light refracted through glass or prisms. it inspired them to make sure there are many hanging lights so that the children and the surrounding community can feel safe at night.  They  also interpreted “lantern” as another version of faceted glass, one that protects a flame.  They named their sheltered multi- use space the Klong Toey Community Lantern.  There are two  levels (also inspired by the kids’ drawing of how they can observe each other from up above); many opportunities to climb along the walls of the oblong structure; to perform on a stage; or to play  basketball or sit in cozy nooks. 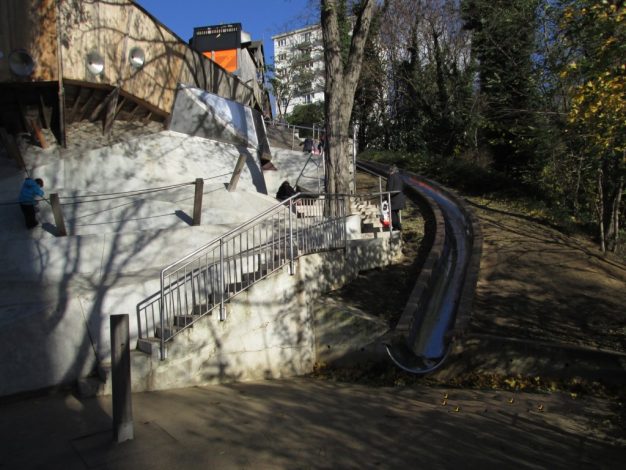 Back in their own country, TYIN worked with Rintala Eggertsson Architects (2013) on a pilot project called Barnetraak for the Gran municipality and the State Department for Roads. The goal was come up with models for activity where children could pause and interact when they walk or bike to school. The completed design is outstanding: a cluster of free standing “huts” with vividly colored, unexpected interiors. If the children had been asked directly what they wanted, it is unlikely they would have thought about a staircase to nowhere or a series of broad shelves  Have a look at these handsome, yet inexpensive, paradigms (which may be replicated on other Norwegian roads) and see how fantastic design is possible on a limited budget.  I challenge you all to think of how many activities exist in the grouping of 4 (the number is totally variable). Just a few  could be: playing house; organizing a store; performing a dance or song; hiding under shelves or jumping from one to another; moving across an overhead beam; climbing through an open “window; ” or sitting as a small group on facing benches.

We can all learn from these three examples. Remember: there are no “right” questions; no predetermined answers; no single interpretations.

Hopefully, we can liberate ourselves to learn the most from children and this data will lead us to stimulating exciting conclusions for all families.

Great! We have always asked our end users the exact same questions! We realised really early on that we had to focus their attention on the ‘activity’ rather than the object. This helps define the brief of the project without stifling the creativity of the designer.

Grant
The City of Play