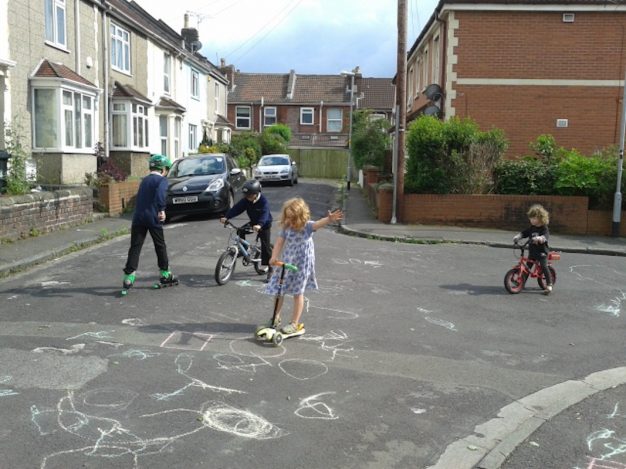 Changing a space: a new kind of playing out

I have a confession to make. I’ve been working for Playing Out as an area activator in Bristol for over a year now and, (deep breath)….. I haven’t closed my street for over six months AND I’m not going to reapply to the council for our third year of playing out sessions. There, I said it!

Who knows, the baton (or should that be whistle?) may be taken on by another parent in the future but I won’t be applying. We have made a change.

It certainly wasn’t a conscious decision for us to stop shutting the street. Until the end of last year we were closing it regularly, and I’ve written before about our first year of playing out. But our New Year’s Day gathering seemed to be the start of a new chapter. Over the course of three hours more families emerged, and although we had loosely talked about running a session, we ended up not shutting the street. The kids still played and the only cars were neighbours arriving home from their festive breaks. Since then our ‘play-outs’ have been much more relaxed and informal, they have happened organically after school or when one child is out and starts the trend. We haven’t officially shut the street once with the signs and cones.

A few weeks ago we agreed to meet at our usual playing out slot for the first time in ages. The children played freely, and very quickly the scooters, chalk, bikes and rollerblades were out and play spilled into the road. It felt natural. The parents had a cup of tea and a good catch up and we observed it was nice not to be ‘out of the action’ which can sometimes happens when stewarding. When a car came (the kids usually spotted them first) we cleared the road and the drivers came in slowly and waited patiently for the kids to move.

But we are lucky and have a slight advantage to other streets. Despite living in inner city Bristol we have a small patch of green space. This was underused before we started playing out but it has been re-imagined and is now where play happens – not just with kids on our street but with ‘passing play’ too, and that is mainly down to our swing.

I cannot believe what a difference this one addition has made to the space. Every day kids of all ages stop on the school run for a swing – people come from different streets and our kids use it daily. It’s made from an old motorbike seat (I call it our urban swing) and was put up by a neighbour about a year and a half ago. I am amazed it’s still going! Nearly every day I’m asked, “Can I go and play on the swing?” My usual response is “not in your school shoes….” (we are trying to make this pair last until the end of term!) But most days my daughter crosses the road independently and takes herself over to ‘tree swing’. The swing is an incentive to start playing – it’s a catalyst but it leads to longer more active play. As we hang out there we meet friends and neighbours on the way home from school and very often will be out for over an hour when we have only gone for a quick swing!

As well as the swing, we have a basketball hoop and I chalked “yes to ball games” on the wall. My daughter held a toy sale there recently and a neighbour is planning a garage sale soon. We do litter picks there – this was initially before a playing out session but now we do it when it’s needed – and we are planning to do some planting there too. I am sure this change wouldn’t have happened without playing out. All our sessions started on the green, and as one neighbour said,  “I didn’t even know you guys up this end of the street before playing out – and we definitely didn’t hang out on the green before”.

Our spilling out into the street to play is down to the fact that we held very regular official sessions for nearly two years. We have normalised the fact that kids play out on our street and so, I hope, people expect to see kids playing when they drive into our street.

The changes we have made have reached further than our street too. I was at a local school giving a talk recently, and a local PCSO was in the audience. Whilst talking to him I mentioned where I lived and he asked “Who put all those logs in your play area?” The logs had been left by the council at our request when ‘original tree swing’ blew down. What struck me was that he had referred to our green patch as a ‘play area’. Why did he think that space was now a play space? I think the answer is simple: We have said to our kids “it’s ok to play here”, and they have.

Photo Credit: photo by Playing Out

Football and dementia: heading must be banned until the age of 18

Spending most of 2020 attending school virtually, students at a small charter school in Aurora, Colorado,  are enjoying a new kind of class where everyone chooses what to learn.Read more