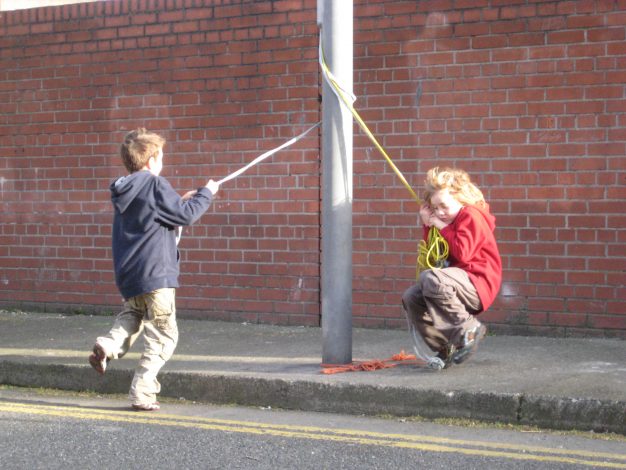 During the last century there was considerable emphasis in some European cities on moving children off their neighbourhood streets and into child-designated areas, such as playgrounds. In fact a 1950s report from the Irish Civics Trust expresses concern at children playing on the streets, in danger of being killed, “and causing considerable embarrassment to the traffic…”(1)

But today there is move towards encouraging children back out to play on their neighbourhood streets, where their presence is recognised as fostering social capital and animating public space. This trend can be seen in some very practical initiatives such as play streets, whereby a street is traffic-calmed so children can play outside. It has also become the focus of more strategic debate, as demonstrated by such as the Dublin City Play Plan, or the annual ‘Spirit’ conference of Play Wales, which this autumn will focus on play in the public area.

However, a recent study on children’s playful experiences on their everyday walks in Dublin, Ireland (2) suggests that they can sometimes feel uncomfortable playing in the urban public realm. One of their main concerns is getting into trouble with adults. As children themselves have explained, this kind of play, where they and their friends playfully interact with the ordinary local environment, is negatively perceived as “messing.”

The research finds that although naturally inclined to be spontaneously playful while out and about in their neighbourhoods, some of the children felt playing together as they walked were forbidden. They explained that rules around ‘messing’, and how to behave appropriately, mostly came from their parents, but that sometimes when they were simply having fun, they got into trouble with other adults, who seemed to think they were misbehaving.

Where the children felt free from adult regulation, they often played very imaginatively. This was more likely to happen in places where adults were unlikely to pass by, or in places that were secluded, such as behind walls or fences.

Children played the most imaginatively where parents would not be looking

In various studies on children’s play in their neighbourhoods a relationship has been identified between play, freedom to roam, and the affordances of the environment (Heft 1988; Kytta 2004). One of the suggestions of the study undertaken in Dublin is that “permission” might be added to that equation. It seems that where playfulness is supported and encouraged in public space, children will feel more comfortable about being playful on the streets of their urban neighbourhoods. 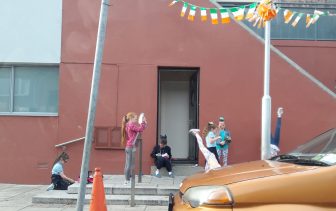 In light of what children are saying it is clearly important that future urban planning strategies address ways to promote play in the public area and create, “space for children to engage in spontaneous play… and to promote attitudes that support and encourage such activity”.

Kytta, Marketta (2004). “The Extent of Children’s Independent Mobility and the Numbers of Actualized Affordances as Criteria for Child Friendly Environments.” Journal of Environmental Psychology 24(2): 179-198.