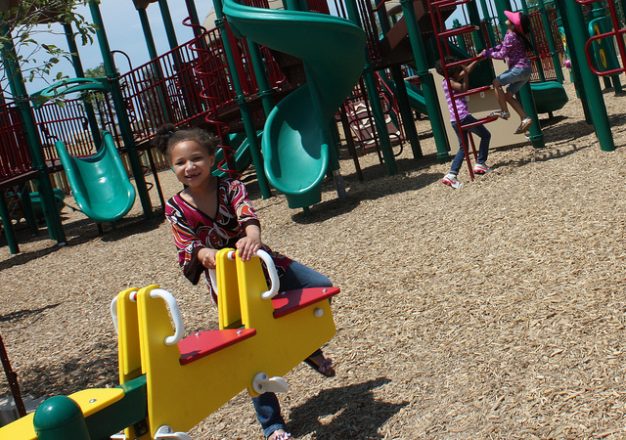 This is an alert. An alert to all those – across Europe and wider – where European play equipment and surfacing standards are held, or will be held, to apply. A new Standard is being proposed, one that will further undermine play provision.

The particular proposed change I focus on here (there are others) aims to introduce a requirement for onsite testing of playground surfaces, in particular, synthetic ones, for example, rubber.

The proposed changes – designated (prEN 1176-1:2016 (E)) – if implemented, will have an entirely negative effect on play provision, piling on significant additional costs or, in an effort to avoid additional costs, providers may well feel compelled to close or further dumb down existing provision.

To demonstrate the scale of the potential increase in costs, one local authority has calculated that an additional annual amount of £400,000 would be required if the proposed change to the Standard is implemented.

The critical point is that there is little to no evidence that the proposed change is necessary.  The UK Play Safety Forum is firmly against the poposal and I understand that both the UK and the German Standard committees have come out against it.  However, some other jurisdictions appear to be in favour.

Robin Sutcliffe, Chair of the UK Play Safety Forum,  has written to the British Standards Committee on behalf of the Forum objecting to the proposed changes and expressing deep concern as to the potential consequences:

‘The forum believe that the case for surfacing itself is controversial and that the level of serious injuries sustained from impacts resulting from falls within playgrounds is not significant and could therefore not be significantly reduced by this measure. The increased costs will either reduce levels of investment in play or see policies of play spaces being removed, or, more probably, both. It therefore follows that if this measure is implemented it will have a serious impact on the wellbeing of children across Europe.’

A UK, Europe and world-wide matter

I have stressed before  that play equipment and surfacing standards are an international matter.  What starts or is agreed in one jurisdiction, pretty quickly spreads to others. This is in because Standards are one expression of  a  pro-free trade ideology.  Whether that ideology is right or wrong, one intent of Standard-making is directed at their international harmonisation in order to facilitate trade between nations and trading blocs. The Transatlantic Trade and Investment Partnership (TTIP) negotiations are part of this too and, assuggested in a previous piece, if implemented could potentially further hamstring and pile on the costs for those responsible for play provision.

I have stressed previously that playground equipment and surfacing Standards are a civil society matter not to be determined by committees heavily weighted in favour of special interests and seemingly dominated by a medical-cum-engineering value orientation.  Having said that, one can begin to detect a stirring of civil society interest in, and a preparedness to take action on, Standards.

The closing date for comments is the 18 July 2016.  Comments from the UK should be sent to the BSI Programme Manager, Governance & Resilience Officer  copied to British Standards Institute secretary.

I repeat, though, that this is a Europe-wide and international matter, so I urge those in other jurisdictions to take up this call, and to circulate it.

I should be very interested to hear of any actions taken.