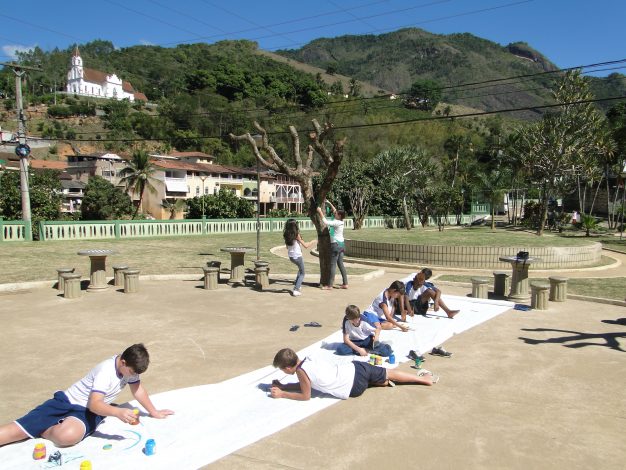 An experiment on a Tyrolean settlement in Brazil

The Italian Territorialist Approach works towards a child-friendly city by empowering children through dynamic techniques and activities to analyse, interpret and change their city. We applied the method in a Brazilian context, and the results reveal the relevant role of children in urban planning processes, as well as how un-child friendly the subject city is.

The Italian Territorialist Approach works on the concept of local sustainable development by critically revisiting classic authors, such as Patrick Geddes and Lewis Mumford, to reflect on the relationship that can be established, or not, between children and the territorial heritage (long-term structures) of urban planning. In the 1990s, the territorialist endogenous approach, what we are calling città bambina, embodies Roger Hart’s participatory planning with children, concerning the concept of “small scale modelling”, and Francesco Tonucci’s project Fano città dei bambini, which means planning a child friendly city.

In Italy, under the Plan of Action for Children and Adolescents (1997), the government assumed the principles of the Convention on the Rights of the Child (CRC), and UNICEF’s policy “Working towards child-friendly cities” (1996), to enact a law “Regulations for the promotion of the rights and opportunities for children and adolescents” (28th August 1997 no. 285).

The città bambina approach, bringing together a theoretical and empirical basis constellation towards urban planning, is the methodological axis to experiment on the Brazilian context. The site for the experiment was Santa Leopoldina, an ancient Germanic migrant colony in the State of the Espírito Santo, built in the mid-nineteenth century mostly by German, Austrian, Dutch, Swiss and Luxemburg.

The experiment is developed in a public school following the città bambina techniques and activities, adapted into 5 steps: 1) Drawing the home-school route; 2) Intervention at the playground with a mural; 3) Maquette of the city they want to have; 4) Intervention by the river with a mural; 5) Collective mapping the city. The objective is to identify heritage values by interpreting the products of the children, as well as their decisions and actions during the process, to analyse the urban heritage of the place and comprehend how children relate to the memories of their ancestors, the tangible and intangible legacies.

The results of the experiment of the Italian approach in Santa Leopoldina enriches the state of the art by means of studying a child-friendly method not used in urban planning in Brazil and adapting it to a local reality, especially by reflecting on the concept of heritage as a long-term structure. Finally, comes an impasse that reveals that Santa Leopoldina is not a child-friendly city, but it could be with urban interventions to favour the autonomy of children, such as the ones they indicated during the activities, which would increase collective health, well-being and happiness alongside the whole community.

Interested in hearing more about this topic? Join us at the Child in the City Conference in Ghent, Belgium on the 7-9th November!