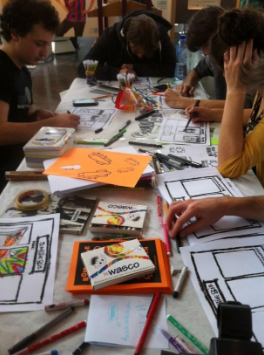 In 2017 the innovative, new city library for Ghent, to be known as ‘De Krook’, will become a reality. The future library will offer more than just books, movies and music: it will be a place that stimulates, inspires and invites the visitors to take an active role in a unique place of knowledge and culture. A vitally important part this ambitious project will be the library for young people. In search of inspirational ideas to create this place, the library’s designers relied on real experts: the youth of Ghent themselves. A special research and participation project called “Bomb the Bib” (Bomb the Library), aimed to elicit explosive new ideas…

‘Bomb the Bib’ ran from June 2013 until May 2014, aiming to explore the involvement of young people in the activities of public libraries in general, and specifically in the creation of a new library specifically for them and their peers within ‘De Krook’.

The research centre ‘iMinds MICTUGhent’ designed the methodology of the research project, ‘Living Lab research Bib2.0’, while ‘REC Radio Centre’, a future co-habitant of the new site, was responsible for external communications.

The Living Lab research aimed to identify the potential target groups in Ghent and their expectations of a modern library. It consisted of an environmental scan, international expert interviews and a survey, completed by 500 young people (20% of the young population of Ghent). The final report, with the recommendations by the young people themselves – on service, offer, activities, atmosphere and interior design – was given to the international team of architects. ‘Bomb the Bib’ also helped to create political support for the idea of a young people’s library.

Ghent City Library wants to underline the importance of the role a public library can play in activating young people in our society, and motivate them to cooperate through the introduction of ‘Young Ambassadors’.

By joining forces with the youth services of the City of Ghent, using their participation-methods and experience working with young people, we wanted to actively involve a representative part of our target group in the creation of the new library, building further on the results of the research of Bomb the Bib. The focus was on an important transformation of the library concept: from ‘for the inhabitants and users’ to ‘from the inhabitants and users’ = ownership.

Regular workshops will be held, with the main goal to keep abreast of the needs, expectations and interests of young people. There will be wide a range of activities for young people to get involved with in various ways: assembling the collection (books, games, graphic novels…); contributing to the opening of the new library; organising concerts; meeting and greeting authors; peer support for reading; opportunities to learn about new information and media methodologies; training in literacy skills; visiting other libraries; and getting inspired by cultural and youth activities in the wider city.

Underprivileged young people were the hardest target group for ‘Bomb the bib’ to reach and are therefore the focus for the project. In collaboration with the ‘vow Jong’, a non-profit organization for youth welfare, we are organising daily activities for diverse groups of children and young people in different neighbourhoods of the nineteenth-century city belt, and in downtown Ghent. We will also start working with other dedicated groups of young people to discuss and further investigate what the new library can mean to them, ensuring that the new youth library is as relevant as possible to all young people in Ghent.

Interested in hearing more on Patricia’s research? Join us at the Child in the City Conference in Ghent, Belgium on the 7-9 November!