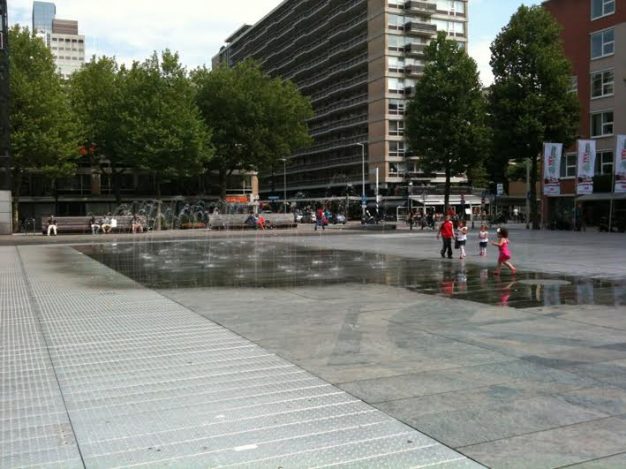 Research indicates that adolescence is a period of significant mental and social development, where peer influence and a developing a sense of belonging are critical issues as young people become more susceptible to the effects of social exclusion.

As young people become more independent, they look for sites where they feel safe, and which can fulfil their needs for social interaction, self-expression and retreat. Public spaces can meet these needs, and be sites for new encounters. This in turn can produce tolerance and a greater understanding of difference during the formative period of adolescence.

Yet public space is formed and transformed by multiple factors – including economic, social, cultural, political and conceptual. How do these factors affect young people’s access to space, ability to socialise, be expressive and play?

Schouwburgplein (Theatre Square) in Rotterdam, for example, was developed as part of an urban renewal policy to increase business, tourist and residential investment. Conceptually, the designers aimed to promote freedom of expression by encouraging users to be ‘actors’ rather than spectators – that is, not passive – in the belief that individuals can create their own forms of recreation. Action is promoted by the square’s surface being raised above ground level, giving a sense of walking up on to a stage. The permissibility to play is promoted through a series of design measures that encourage engagement with the space, such as a water feature, long benches, different surfaces, and interactive, crane-like lights. 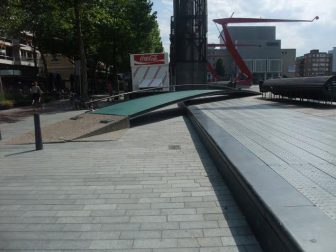 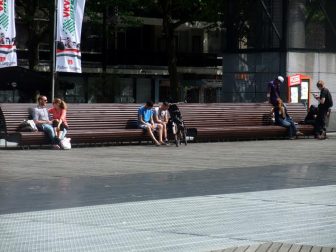 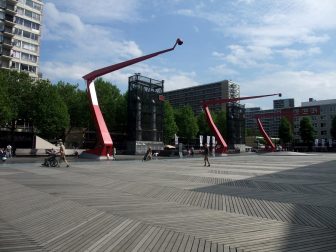 The square has become a site where young people ‘hang out’, including those from a range of ethnicities, allowing identity formation away from the family gaze, increasing agency and, potentially, a sense of belonging. They can socialise, play football, skate, flirt and hang-out in a well-lit, easily accessible space, which they perceive as safe.

In 2008, 12 years after the square’s inauguration, Leefbaar Rotterdam (Liveable Rotterdam) called for the city council to conduct a design review of the square. Their criticism included a lack of people, low vibrancy and that young people’s use of the square created a sense of insecurity. Public meetings, site observations and user interviews were conducted. This proved beneficial in reinforcing the importance of the space to young people and families, while also highlighting its lack of appeal to some, such as those aged over 65. The public consultation also indicated intolerance towards youthful activities and, subsequently, the space has become more constrained by, for example, the implementation of earlier cut-off points for informal night-time activities.

Progressive local government leadership and visionary practitioners sympathetic to young people’s rights and needs created a space where a field of free action was promoted. However young people’s use of the square was questioned as a result of less tolerant attitudes and residential proximity to the square. The contested nature of space amplifies the need for a multitude of varying spaces; and the recognition, particularly in planning policy, that young people of all ethnicities have a right to play and a need to develop their identity in public space.

Claire Edwards is a (soon to graduate ) Master of Research. Her research focuses on the provision of public space for young people. It examines the cultural, socio-economic and policy factors affecting their access and provision within space. It explores ways for transforming space in towns and cities, including theoretical, conceptual, participatory practice and case study analysis.

Interested in hearing more on Claire’s research? Join us at the Child in the City Conference in Ghent, Belgium on the 7-9 November!

Clark, C. and Uzzell, D,L. (2002) The Affordances of the Home, Neighbourhood, School and Town Centre for Adolescents, Journal of Environmental Psychology, 22, pp.95-108.

Kyttä, M. (2002) Affordances of children’s environments in the context of cities, small towns, suburbs and rural villages in Finland and Belarus, Journal of Environmental Psychology, 22, pp.109-123.

Kyttä, M. (2004) The extent of children’s independent mobility and the number of actualized affordances as criteria for child-friendly environments, Journal of Environmental Psychology, 24, pp.179-198, p.181.

Lootsma, B. (2000) SuperDutch – New Architecture in The Netherlands, London: Thames and Hudson.