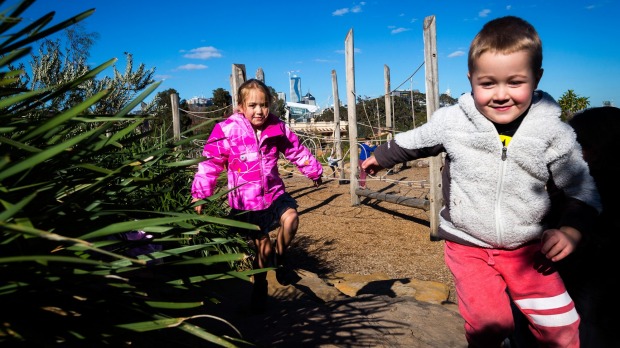 A Melbourne children’s playground designed to encourage risk-taking – through rocky outcropped terraces and lofty climbing ropes – has been crowned the nation’s best.

It is known as Nature Play and sits in Royal Park, next to the Royal Children’s Hospital.

It was designed to help kids – inner city ones especially, who were were spending so little time in nature – find an element of unpredictable play.

And it was that unpredictability, among other things, that swayed the Australian Institute for Landscape Architects to award it the nation’s best playground. 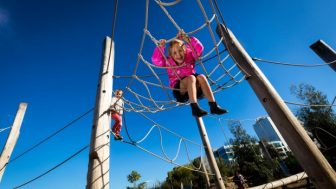 “The idea,” says its principal landscape architect Skye Haldane, “was to provide the opportunity to take risks”.

“That gives [kids] confidence to do more. It’s no more or less risky than any other play space.”

Built for $5.5 million and opened last March, the park has 1200 trees, gullies, grasslands and a hill with dramatic city views. And, to the chagrin of many parents and the delight of their children, the park also includes a water play area encouraging kids to work together to pump and dam water, before finally being released it into a sandpit.

Special attention was also paid when the park was built to enabling children with all sorts of needs to play together. It is common to see a medical team wheeling a patient in a hospital bed or wheelchair to the edge of play areas.

It doesn’t have recognisable boundaries, which encourages children to explore the wider Royal Park, but it does have the traditional markers of a park: slides, swings and climbing frames.[+] Read More