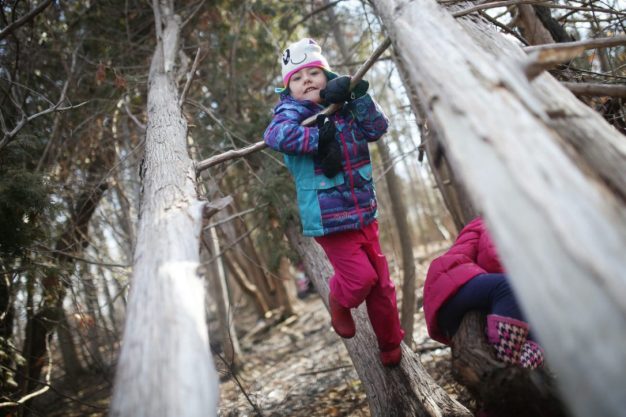 Every day in Simcoe County, 150 kindergarten students are exploring new territory, and in more ways than one.

They’re doing it while marching through muddy forests during outdoor lessons across the region north of Toronto. They’re also breaking new ground in research, as subjects of a two-year study. The study is the first of its kind in Ontario and will investigate the impact of regular learning time outdoors in nature.

But educators wanted hard evidence. How does being outside actually affect the children’s ability to learn?

So they launched the study this year, in partnership with the Burlington-based Back to Nature Network and funded by $89,000 from the TD Friends of the Environment Fund.

The project involves six classes in three schools. Half the classes spend 100 minutes or more outside every day and the others, acting as a control group, are outside much less. Next year, it doubles to six schools.

Goals include monitoring each student’s self-regulation — a skill that’s key to learning — as well as teacher satisfaction and whether outdoor time at school impacts decisions to go outside at home.

The Star spoke with lead researcher Andrea Faber Taylor, a child environment and behaviour researcher at the University of Illinois Urbana-Champaign. Here’s an edited and condensed version of the conversation…[+] Read More