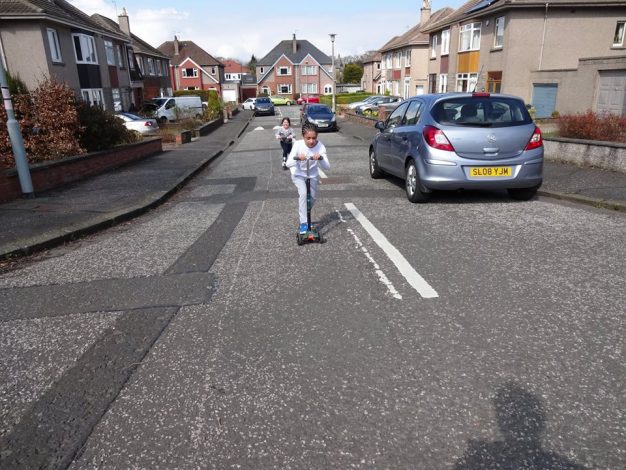 Bringing Street Play back to Edinburgh

The short film, ‘Singing Streets’ shows children playing and singing freely on the streets of Edinburgh in the 1950s, when the city had a scheme known as ‘Play Streets’: where streets would be closed for a set period of time each week, to allow children to play freely and safely near their homes. During the course of the intervening years these schemes disappeared. At the same time the volume of traffic on the roads – and the level of parental fear about children playing outside – has risen. The result, today, is a distinct lack of play on the streets of Edinburgh, and a culture of children growing up indoors.

Although the problem has not been ignored by charities, policymakers or local communities, there remain significant barriers to street play in the Scottish capital. For instance, Edinburgh has many traditional Scottish tenement buildings, which can mean that many areas are densely populated and, with this, many residential roads are lined with parked cars.  Moreover, highways legislation can make it difficult (and expensive!) for local communities to apply to close their streets for play.

All this is set to change with a new scheme, called Edinburgh Playing Out, which is campaigning for changes to the way we view street play. The concept of ‘Playing Out’ began as a Bristol-based Community Interest Company in 2009, and has spread across England and Wales as local activists and charities have become increasingly supported to initiate their own street closures. It has now reached Scotland, with the ‘Edinburgh Playing Out’ project encouraging parents to apply for street closures for their children to enjoy being outside (of which they are entitled to one free per year).  To establish this, on the weekend of 9th and 10th April, Edinburgh Playing Out encouraged the mass organisation of playing out events, with four street closures taking place across the city.

Blogs and photos available from the campaigns page show the success of the events, and parents and other local residents have shown their support for the idea. Moreover, the campaign has seen a surge of support for reducing the restrictions on temporary street closures, so much so, that on 12th April 2016, the City of Edinburgh Council announced they would dramatically reduce the private cost to individuals of applying for street closures for play.

The campaign and subsequent events show the power of local residents to begin changing the way society looks at children’s use of public space, welcoming them back on to the streets to play. With reduced costs and a number of pilots under their belt, the city’s play advocates and supporters have renewed hope that the ‘playing out’ movement will grow, and that Edinburgh’s children will be increasingly free to take to their streets once more.