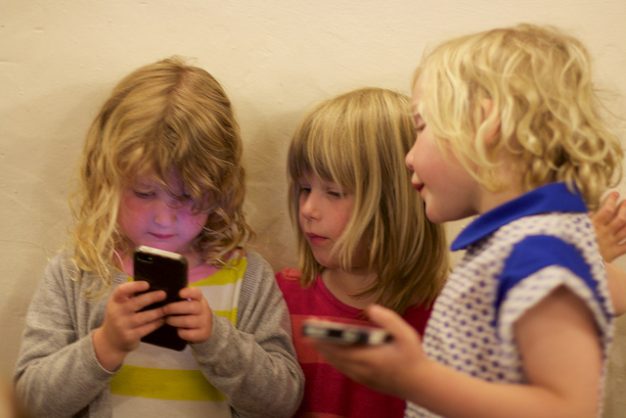 The State of Play in the USA

Kids spend a lot of time in front of entertainment screens—televisions, computers, and smaller electronic devices. Even the most conservative estimates put screen time for children ages 0 to 8 at two hours per day, and a recent University of Michigan Health System study found that 26% of parents report that their children 2–5 years old have three or more hours of daily entertainment screen time 12. Other studies show that usage increases dramatically as children get older—as 8- to 10-year-olds are on screens for five and a half hours per day. The most recent study done by Kaiser Family Foundation demonstrated that kids 8-18 spent 8 ½ hours per day on ‘screen time’.

Children are not playing in schools

A 2009 study published in the journal Pediatrics found that 30 % of children surveyed had little to no recess in their school day. That’s nearly one in three kids. This is in spite of research, such as a Gallup poll revealing that elementary school principals overwhelmingly believe recess has a positive impact not only on the development of students’ social skills, but also on achievement and learning in the classroom.

The updated journal of Pediatrics study completed in 2015, showed:

• 28% of 2-year-olds could navigate a mobile device without assistance.

• 28% of parents said they use a mobile device to put their kids to sleep.

The use of tablets and smartphones among young children has simply become child’s play, with kids able to skillfully tap and swipe before they can walk or talk.

2. As children’s play time declined, this lack of play affects emotional development, leading to the rise of anxiety, depression, and problems of attention and self control.

3. 5 year olds today have the emotional development of 3 year olds of the past.

4. Parents must make the time to allow their kids to play, play brings many benefits to your child and you.

Active play helps children adjust to the school setting, and enhances their learning readiness, behavior, and problem solving skills. Schools without recess face increased incidents of classroom behavioral problems, which detract from learning time. Play also may increase children’s capacity to store new information, as their cognitive capacity is enhanced when they are offered drastic changes in activity—switching from English to math is not enough. The decline of time for recess, and other opportunities for active play in school, is happening across the board.

A 2008 report from the Center on Education Policy found that between 2001–2002 and 2006–07, 16% of schools cut art and music and 20 % cut recess. But it disproportionately affects the 16 million American children living in poverty.

In the same report, high-poverty elementary schools were four to five times more likely to go without recess (18–28%) than schools with the lowest age of children in poverty (4–5%).

Only 9% of elementary schools, 8% of middle schools and 2% of high schools provide daily physical education for all students. According to the Institute of Medicine, 44% of schools across the United States have no Physical Education Classes since The No Child Left Behind Act was passed in 2001.