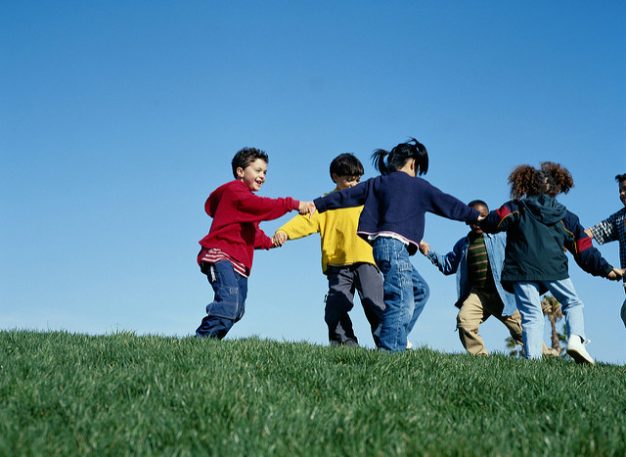 Lab van Troje, a local non-profit organization in Ghent, Belgium is preparing a fourth generation of ‘Living Streets’: an experimental project that invites citizens to conceive and implement more sustainable and livable solutions for the design of their own street. The third phase of the project included an ‘experiment within the experiment’: an initiative to give children a stronger voice in the process, a greater stake in their own Living Streets.

‘The Living Street is an experiment in which residents take over their street and convert it into the street of their dreams. By temporarily banning or partially banning cars from the street (or a section of it) and finding another place for parked cars (e.g. in a local car park), space is created for greenery, encounters and social living.

Every Living Street is different. Each one is based on the wishes and needs of its residents. They consider the challenges in their street, look for solutions, and then have the opportunity to work on realising their own ideas and aspirations for it.

To become less dependent on cars, for a month, residents explored alternative means of transport: electric bicycles for commuting to and from work, cargo bikes for shopping, home deliveries, car-sharing, using local businesses etc. This enabled them, along with volunteers from the Lab van Troje network, to find out whether a different street design, combined with reduced car use, could make living in the street and life in the city more pleasant and sustainable’.

A strong motivation for citizens to turn their street into a Living Street is to (temporarily) create a safer outdoor play environment for children, by banning cars. Yet, despite this clear child orientation, Lab van Troje found that children were only scarcely involved in thinking about possible scenarios for tomorrow’s street life – or, indeed, the future design of their city. They seemed to be chiefly addressed as street users only once the changes were completed. However, in turning a street into a Living Street, several choices need to be made that are agreed and carried out by all residents. Thus, to help residents involve children in the planning and design of their Living Street, we initiated an ‘experiment within the experiment.’ We challenged 3 streets to give their children an active voice in the planning and design process.

The initiators of each of the 3 Living Streets ‘for and by children’ were given a Do-It-Yourself guide and toolkit. This book consisted of a list of child-friendly tools (workshops, short activities, tips, etc.) that residents could use to systematically plan their Lving Street together with children. The tools reflect the different steps in any process of planning or design. This invited residents to actively involve children in thinking about what a liveable street in the city might mean. The different communities also learned from each other by visiting each other’s street and hearing about their different experiences of the exercise.

Lab van Troje will complete its Living Streets experiment by the end of 2017, when the results will be passed to the local government.

Sven De Visscher is a lecturer at University College Ghent in Belgium and a member of Child in the City’s Scientific Program Committee (SPC). He is part of the urban education team in the department of social work that develops research and teaching projects about education and social work in urbanising contexts. Sven holds a PhD degree in Educational Sciences, based on a study of the social pedagogical meaning of the neighbourhood for children. His main research topics include child friendly cities, childhood studies, urban public space, community development and urban regeneration.