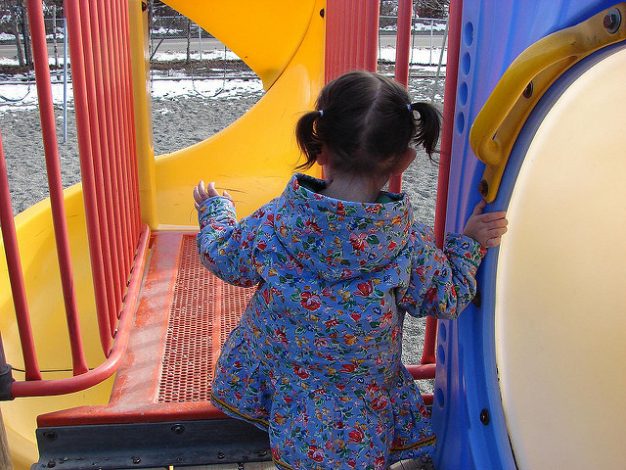 Play through the eyes of a child – Part one

Children perceive every environment as a possible playground, open for them to just be themselves and have fun. Viewed through the eyes of a child, play has vast and numerous possibilities. Play is an instinctive and a natural characteristic, which to a playing child presents limitless opportunities. Play is not a term that can be easily ‘pigeon-holed’. It is open-ended, not comfortably fitting any one definition.

“…play in a period between birth and middle-childhood, in an environment that is enriched, will promote brain growth and neurochemical activity.” [1] Another component to appreciate when speaking of the freely playing child is that, due to plasticity in brain growth during this critical period, there is that the child’s brain is developing and increasing in size.

A recent article in the Washington Post, as cited by treehugger.com, discusses the problems that are being identified in children and attributes these problems, in part, due to the lack of outdoor, free play opportunities; Angela Hanscomb suggests:

“ If children are not given enough natural movement and play experiences they start their academic careers at a disadvantage. They are more likely to be clumsy, have difficulty paying attention, trouble controlling their emotions, utilise poor problem solving methods and demonstrate difficulties in social interactions. We are constantly seeing sensory, motor and cognitive issues pop up more and more in later childhood, partly because of inadequate opportunities to move and play at an early age.” [2]

What’s in the urban environment to spark off the imagination of a child, fully in tune with their desire to play, although the environment may not have the child’s play needs at its heart?

These are just two examples of how an everyday environment can become a magical space for a child to extend themselves. Direct from their imagination, play becomes a narrative that children may or may not wish to return to, which has been chosen by the child at that given moment.

Ultimately, play through the eyes of a child is a tremendously enriching experience, especially if it can be outdoors and truly directed by the child herself. Children have a knack of creating play wherever they are, which is a fundamental aspect of childhood.

[2] Want your kids to do well? Send them outside to play. 16 February 2016 http://www.treehugger.com/family/enough-free-play-bashing-s-just-what-preschoolers-need.html