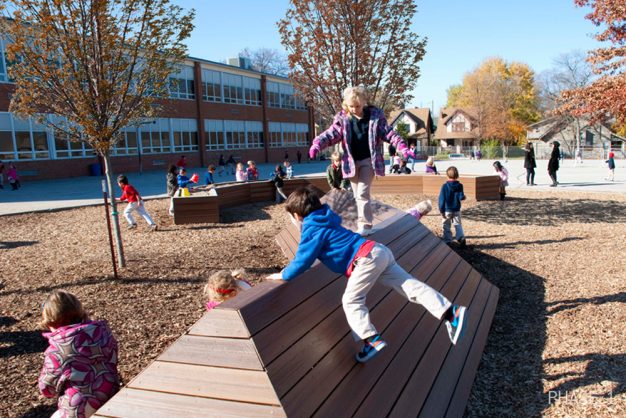 How playgrounds can stimulate imaginative play

Systematic researches of the last few decades demonstrate that imaginative play is an essential component of a balanced child’s development. However, the key question that arises from this conclusion is whether the more common playground equipment provides the appropriate setting to inspire imaginative play.

Inga Saffron, an Architecture Critic awarded with a Pulitzer Prize, eloquently illustrates the existing reality in Philadelphia. In her article about contemporary playground design she writes: “When the thaw does come, as it inevitably will, most children will race out to the kind of playgrounds that feature mass-produced plastic forts done up in circus-inspired colours and perched on spongy mats. Grateful to be liberated from their cabins, they’ll climb, slide, and climb again. Then they will repeat that sequence over and over, while their bored parents stare at smartphones.”

Later on, and while reviewing Susan Solomon’s book “The Science of Play”, Saffron concludes: “Character-building adventure and imaginative play takes a backseat to liability concerns.” Apparently, there is an emerging awareness that play spaces need to be designed in ways that not only encourage physical activity, but also sparkle imagination and promote sociability.

Moreover, as Susan G. Solomon points out in her aforementioned book, “the (playground) equipment is expensive, making it hard for towns to keep up with the demand for play spaces”. Considering this financial fact, many playgrounds of today not only lack stimulation for imaginative children’s play but also cost too much, compelling the city authorities to significantly reduce the number of public spaces dedicated to children.

The “Académie Lafayette Playground” in Kansas City, Missouri, USA, designed by the KEM Studio, is an exceptional example for a low-cost playground that promotes imaginative play and encourages social interaction. Not only was it developed and constructed on a small budget, but the thoughtful approach of the KEM Studio also contributed to reducing costs by designing structures that could be easily built by volunteers using existing, reusable materials. Additionally, the project was partially funded by a crowd-funding campaign and donations by local industries.

Among commonly used equipment such as swings, the playground consists of simply shaped structures that form “hills”, “tunnels” or even “rocks” according to the imaginative perspective of the user. The main goal of the design team was to “encourage imagination and creative group play through the design, scale and proximity of forms. Unlike traditional playgrounds, this solution takes the innately collaborative nature of much children’s play – the context for the design – and applies those principles to the construction itself, so that the playground itself becomes collaborative”.

Here, children have the chance to climb the wall, jump, swirl, hide in a nook, slide or roll down the inclined surface in teams, hop on the car tires, create and build in the sandbox and so on. The simple forms provide an unlimited number of scenarios and settings for children to invent, collaborate and act within.