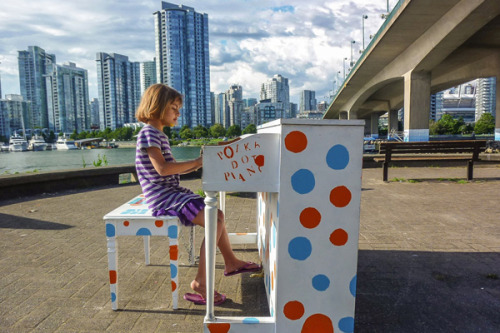 The suburban shift: why families are choosing to live in cities

Many families move to suburban areas: looking for a better environment for their children or in order to avoid the perceived downfalls of the city life, such as heavy traffic and the lack of green space. Vancouver-based urbanist, Jillian Glover, an communications advisor with the Canadian government and blogger at ‘This City Life’ has identified why more families are choosing to raise their children in cities, specifically because of the many benefits to their health and well-being.

The issue of family-friendly cities and walkable communities is important because many families don’t think that city life in a smaller home is safe or practical, and they move to the suburbs. I grew up in a few large homes in the suburbs, where I was totally reliant on a car and watched my parents spend entire weekends maintaining our home.

I also believe that suburban living has led to destruction of natural ecosystems, social isolation, health problems, excessive consumption and car dependence. With my Kids in the City series, I wanted to show how people raising children in compact walkable communities have found happiness and a healthy lifestyle. And that is what I discovered. From profiling Adrian, a dad with 5 kids living in condo, to Jonathan, the Mayor of New Westminster, who downsized from a single family home, here is what I learned about the benefits of raising kids in the city:

Living in cities means you are more likely to live close to your child’s school, community centre, shops and more. Your home is probably smaller and you can avoid car trips, so this means more time can be spent with the ones you love. For example, my friend and mother Danika moved from a rented single family home to a new condo. She now has a gym, grocery store and park at the base of her building, so as she puts it “life just feels easy.” Another parent I profiled, Jonathan, says that moving to a condo (that is actually larger than his previous house) has meant he spends less time in the car and working on his house.

Access to Urban Amenities: The City is our Backyard

When people live in urban environments, they often have to give up the dream of having a backyard, so the city becomes their outdoor playground. If cities are planned well, families have access to museums, playgrounds, pools, skate parks, beaches, and movie theatres – all without getting in a car. They are more encouraged to use these public spaces because they are close by and they do not have the option of hibernating in a big home. According to Adrian:

“When we live small, we invert our life. Instead of bringing everything inside our four walls, we rely on the world outside our walls. Our yard is the local park. Our “man cave” is the movie theatre. Museums, food trucks, art galleries, music festivals, kids fairs, and more are all within walking distance.”

The Value of Experiences

Many of the comments I received from urban families stressed the importance of experiences, as opposed to owning a lot of stuff. Cities offer children exposure and better opportunities to experience great public spaces and interact with a diverse range of people. Darin, a father living in downtown Atlanta, said, “We can give our child the experience that both of us wish we had growing up in the suburbs: not being tied to a car; having the freedom to move around via multiple transportation modes; having the excitement of different experiences and people right on our street – versus the often sedate and homogenous environment of car-centric suburbs.”

Akua, a mother who lives in a lane-way home, talked about the importance of putting her money towards experiences:

“My husband and I have always tried to put our money towards experiences rather than stuff. Living by those convictions is much easier when you are in a small home because the physical space itself restricts what you can bring into the house.”

It goes without saying, that smaller homes mean reduced energy costs. But it’s not just a means of using less heat and water in a smaller home. When you have a big home, your first inclination is to fill it with stuff. You also use more energy keeping it clean, watering your lawn and the big energy hog, your personal vehicle, which you need to get around when you live in a big isolated home. According to Adrian:

“When I lived in a 2500sqft house, my hydro bills were hundreds of dollars. I also drove everywhere without thinking, renovated perfectly good rooms (creating needless waste), and purchased far more consumer goods because I had the space to fill.”

The families I spoke to all talked about how living in the city reduced their desire to own stuff (even cars, which you can access by car-share in a city). Owning stuff is not only expensive; it requires a huge amount of maintenance. The common sentiment among families is that there is never enough time or money. The families I profiled recognized that they are happier not having to spend their money on stuff and choose to spend it on experiences instead. As Jonathan says “An afternoon at the River Market getting ice cream is worth a lot more than any toy.”

If you live in a walkable community, you walk, bike and take public transit more. This means more exercise and time outdoors. I like this point from Darin:
“My son proclaims that our neighbourhood is the best place to live. It’s exciting for a kid to be able to walk out the front door and get himself someplace on his own, without having to be shuttled around in the back of a car.” That is one thing we don’t really consider, how this ability to walk places gives children more autonomy and self-confidence.

Expanding on that idea of autonomy and self-confidence, children who live in cities are exposed to more people, which gives them more opportunities to enhance their social skills, as well as develop a better understanding of diversity. According to Patrick, a father in Minneapolis: “I love that my son is learning to be engaged with neighbours, business leaders and others in his neighbourhood. This skill will allow him to view people with more understanding and acceptance.”

And finally, a benefit of living in a compact home is better family connections.
“What our family loves about living in close quarters is how it brings us together. I feel much more connected to my kids than I did when we lived in a big house. It teaches us to respect each other more than if we were able to squirrel away somewhere,” said Adrian.
When we live in close contact with each other, we are forced to learn how to cooperate and give each other space. Now that we know how cities can be great places to raise children… how do we create a child-friendly city?

Author: Jillian Glover, M.Urb
Jillian Glover is a communications advisor who specializes in urban issues and transportation. She is a former Vancouver City Planning Commissioner and holds a Master of Urban Studies degree from Simon Fraser University. She was born and raised in Vancouver and is very interested in how people in urban environments engage in their cities. In her spare time, she writes about urban issues at her blog, This City Life – which you can visit at www.thiscitylife.tumblr.com.
Photo credit: Title photo by Modacity www.modacitylife.com

1 comment op “The suburban shift: why families are choosing to live in cities”

I don’t want kids, but if I did, I’d make it a point to raise them in a city. I lived in suburbs starting at age 10-11 or so and it’s extremely limiting. I guess it’s supposed to be the best of rural and urban living combined, but I’ve always considered it the worst aspects of both.